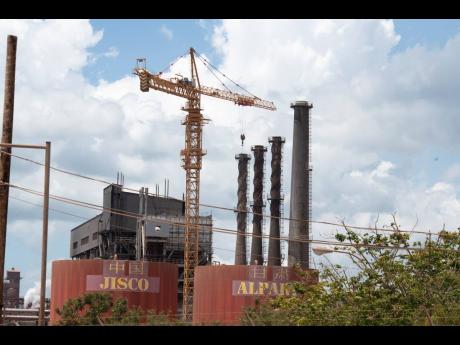 Residents have got used to being paid this money as compensation for the inconvenience they suffer as a result of the mud lake being located close to their communities. However, Monday they woke to news that the 'dust money' compensation, an arrangement that exists for some 30 years, would be scrapped.

Angered by the news, persons in areas such as Warminster, Genus, Brinkley, Austin and Hall Valley mounted a demonstration at the gates to the bauxite plant.

"People have been experiencing dusting from the mud lake for years. Every time there was a dusting, they (Alpart) would compensate the people to clean up their houses, to redo their crops that got damaged and they took them to the doctor," Alpart Community Council chairman, Lenworth Blake, said.

"Dusting took place over the weekend ... and the company decided they were not going to continue with the compensation package. That did not go down well with the people," he continued.

Blake, along with Leighton Smith, councillor for the Myersville division, and Franklyn Witter, the member of parliament for South East St Elizabeth, met with the company's representatives to hammer out a solution.

"We met with senior management from JISCO to express our views and tell them the history behind it over 30 years. You dust, you compensate! If you don't want to compensate, you don't dust," said Blake, adding the dust was terrible on Saturday.

"Nobody can live under those conditions," Blake said.

"It's going to cost people every time they need to clean up their houses to restore it to the original state."

The operators of JISCO have been asked by the communities to pay $7,500 per two bedrooms and $5,000 per one bedroom as compensation. The are also being asked to fork out money to compensate farmers.