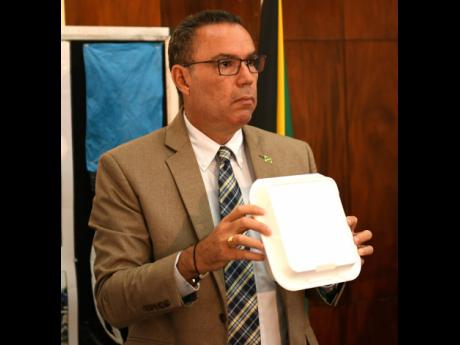 Daryl Vaz, minister with responsibility for the environment, displays a styrofoam box.

Minister without Portfolio in the Ministry of Economic Growth and Job Creation, Daryl Vaz, says the Government is extremely pleased with the overwhelming positive national reaction and response to the ban on single-use plastics and polystyrene (styrofoam) products.

Speaking in the House of Representatives yesterday, he noted that the support is estimated at over 90 per cent coming from the sector groups, other stakeholders and consumers in general.

"Clear evidence of the positive response is the rapid disappearance of single-use plastic bags and plastic straws from the trade and the pronounced behaviour change and attitude coming from the Jamaican people," Vaz said.

Need to put in place fines

On September 17, 2018, the Government announced a policy to implement a ban on single-use plastic (scandal) bags, plastic drinking straws and expanded polystyrene foam products used in the food and beverage industry in three phases, starting January 1, 2019.

Vaz said that while prosecution is never the preferred strategy, the Government saw the need to put in place fines for those who are non-compliant, and to ensure that the legislative backing is in place, should enforcement of the ban become a challenge.

The maximum fine under the Trade Act (Trade Plastic Packing Material Order) 2018, is $2 million, while under the Natural Resources Conservation Authority (Plastic Packaging Materials Prohibition) Order 2018, the fine is $50,000. Both orders carry a term of imprisonment of two years.

"Unfortunately, to date, six businesses have been fined under the Natural Resources Conservation Authority (Plastic Packaging Materials Prohibition) Order, 2018," Vaz said. "Thirty other businesses and individuals will face the courts in the coming weeks, making a total of 36 businesses prosecuted, up to the present. Warning notices were issued to the non-compliant persons and companies before enforcement action was taken."