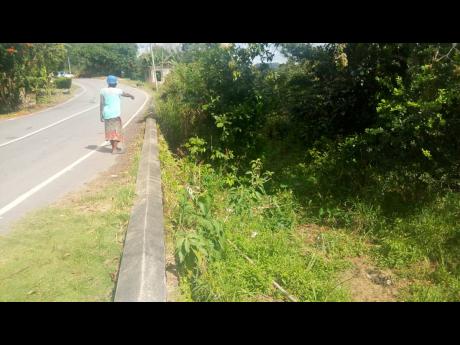 Tangle River resident Ms Pearl points to the spot where Watkins fell to his death.

Residents in Tangle River, St James, are in shock following the death of one of their beloved community members, who seemingly fell to his death early Tuesday morning after a night of drinking.

He has been identified as 48-year-old labourer Shawn Anthony Watkins, otherwise called 'Wasp'.

The Spring Mount police reported that on Monday night, Watkins was drinking with friends at a number of shops and bars in the community.

He was last seen walking down the main road towards his home. It is believed that he stopped to urinate, when he fell over an embankment.

About 8 a.m., residents stumbled upon his body lying in bushes.

The police were summoned, the scene was processed, and Watkins was transported to hospital where he was officially pronounced dead.

"But a one thing, him drink nuff rum," Anderson said. "Whenever yuh see him is like him always a drink. Him don't have time fi trouble anybody, him just drink him rum."

One resident, Nigel, told THE WEEKEND STAR that he was with Watkins on Monday night.

"Him lef wi and all a wi think him gone home, but wi hear seh him stop a several other bar inna the area ... only fi hear seh dem find him dead ova precipice the following morning," he said, describing Watkins was an "irie man" who was very jovial.