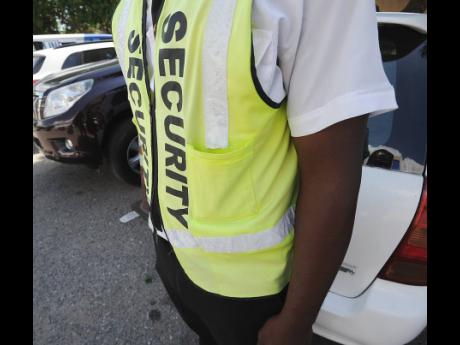 A man who demanded 'his' money from a bank along Great Georges Street in Savanna-la-Mar, Westmoreland, yesterday, was shot and injured by a female security guard after he attacked her with a knife.

The Westmoreland police confirmed the incident, and indicated that the unidentified accused has been admitted to hospital in stable condition, under police guard.

Superintendent Robert Gordon, commanding officer in charge of the parish, said the matter is now under investigation.

"The police have been informed that the accused has a mental issue, and yesterday he went inside the credit union bank along Great Georges Street, where he started shouting out that he wanted his money," Gordon said. "When he was cautioned by the security guard, he reportedly jumped over the counter and made advances towards a cashier. He was approached by the guard, whom he attacked, and was shot in the process."

Gordon said that he would like to highlight that it was very important to have adequate security at institutions.

"The police also learnt that the same individual in question went to another bank in the township, and a Jamaica Public Service Company office and demanded that he wanted his money," he said. "Things could have taken a toll for the worst if the security guard was not at the location, and he could have also hurt someone or maybe even pulled off a robbery. So I am encouraging business establishments to emphasise on their security details, to prepare themselves for situations such as these."

A vendor, who gave her name as Jacquiline, said that she has known the accused for some time.

"This morning (Monday morning), mi go a the bank fi bank some partner money, and after mi inna the line, mi si wen the boy come inna the place," she said. "A pure noise him start mek, and a shout out bout the people dem inna the bank fi give him back him money."

She said that the security guard tried to calm him.

"But instead a cool himself, him get worse and everybody frighten when wi see the boy jump ova the counter and dip inna him side. Him then approach the cashier and a seh him want him money, that time everybody start scatter outa the bank," she said. "The security guard run round pon him, and him turn pon the security guard, an a that time them haffi shoot him."