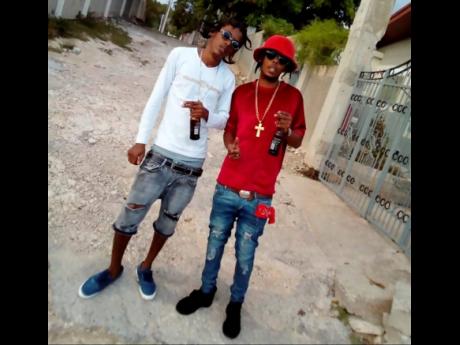 Lisa* could hardly hold back the tears when she started to talk about her brothers, 24-year-old Chandi Knight and 26-year-old Channiel Knight, who were shot and killed in a section of the Central Village community called Elbow, on Monday evening.

"You see if dem did a bad man and dem dead wi would a seh all right and know seh wi affi bury dem, but dem a no nuh bad man. Dem hard working and always about family," she said.

Another man, 48-year-old Kevin Anglin, carpenter of nearby Windsor Heights, was also shot and killed that day

The family told THE STAR that they believe both men were killed because men in the community could not bear to see them elevate themselves.

"Dem do everything together. Dem work together, dem wear the same clothes. Every weh dem go a the two a dem. A work dem go up the road and di man dem kill mi bredda," she said as her head hung in disbelief.

Another sister said that her brothers were killed because they were getting a lot of work.

"This a work thing man because a dem alone a get work. Dem master everything inna construction so when anything a gwan a me bredda dem call fah. A dem even a build mi and mi mada house and dem a build it from scratch. Even the other day construction company get a contract and a mi bredda dem dem call," she said.

Sonia Carthy said she does not have tears to cry as she is still in shock that her sons are gone.

"Even pan the site, dem always a work together. A always di two a dem together anyweh you go. Dem (persons) always want them to be a part of the gang and they refused. Dem fada live pan one side and me live pan one side so dem did just want to be friends with everybody. They did not want to take any sides, they just wanted to work and have a happy life," she said.

HammaG said she was on her way home when she got the call that her brothers had been shot. She said that one of them called her that night.

Residents said the curfew which has been imposed on the community since last Wednesday is senseless as people are still falling prey to gunmen.

However superintendent of the St Catherine State of Public Emergency, Leon Clunis, said that residents need to start confiding in them so that they can catch the culprits who are wreaking havoc on the communities.

"Residents need to start taking to the pole because we are in here and we are doing our best but we don't know exactly where the criminals are. Criminals look just like you and I. They know them. They need to find someone they can speak to confidentially, the police or the army, and give them information so that we can do spear fishing because we have to do a lot of net fishing right now because of the residents' reluctance," he said.