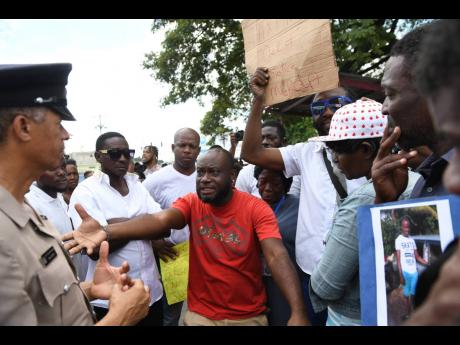 Assistant Superintendent of Police Noel Daley (left) listens to complaints from taxi men who yesterday protested the killing of a colleague on Monday in downtown Kingston.

"He was innocent!" That was the cry by taxi men and residents alike who took to the streets yesterday after the shooting death of 25-year-old Sharwayne Armstrong on Monday evening.

According to an alleged eye-witness, who gathered in front of the Denham Town Police Station, Armstrong was shot in cold blood after a policeman issued him a ticket for blocking the road close to the Coronation Market in downtown Kingston.

"From the reports I received, he was cooperating with the police at first. He became irate and grabbed the papers from the police, jumped in the vehicle and in a bid to escape, he actually hit the policeman. The police had to jump on the bonnet in order to save his life," Superintendent of Police in charge of west Kingston, Leighton Gray, said.

"The police indicated to the motorist to stop and he did not. In fearing for his life, he fired one round. INDECOM (the Independent Commission of Investigations) is on the matter from yesterday (Monday) and we are imploring persons to cooperate with the process and investigation. We want to ensure justice prevails. It is unfortunate to know that a situation like this occurred. We are imploring taxi operators to keep the roadway clear and do not impede other drivers," he continued.

But residents and taxi men accused the police of lying to cover up a grave error made by one of their colleagues.

"Him never did a drive off. All now the car nuh move," one taxi man said.

"A true the taxi man lick dung the policeman the other day dem a come tek revenge, but dem fi know seh a nuh all taxi man a the same. Him not even live fi see him daughter graduate basic school. If him did bad, wi wouldn't deh out yah a protest fi him. Dem kill him inna cold blood," one woman said.

Armstrong's aunt said she does not know what to make of the situation and she is just trying to cope.

"He is a humble and jovial person. All he cared about was working because a taxi him use and mek a living. He has been doing this for the past eight years. You can call pan him for anything and dem just take him like that," she said, tears streaming down her face.