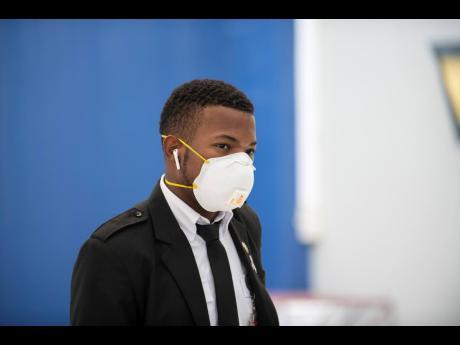 A customs officer is seen wearing a protective face mask at the Norman Manley International Airport on Tuesday.

The Jamaican Government has issued a call for persons who travelled to China during the last four weeks to make themselves available for assessments, to determine whether they have been exposed to the Coronavirus.

At the same time, the Government has issued an advisory, curtailing travel to and from China for the time being, until the spread of the disease is stemmed.

Chinese officials have confirmed nearly 6,000 cases of the mysterious virus. China said on Wednesday that 132 people had died from the virus, which has spread to several other countries including Canada and the United States of America.

While dismissing reports that Jamaica is dealing with a suspected case, health minister Dr Christopher Tufton said his ministry has begun a process to track down persons who recently arrived from China.

"We would ask those individuals, if they are not contacted, to make themselves available, either to their private physician or the public health system,” he said.