One Minute Reads - News for across Jamaica 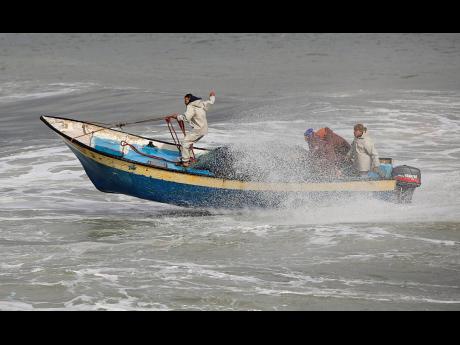 Palestinian fishermen ride their boat amid high waves on a windy and rainy day at the sea in Gaza City on Sunday.

The opening of Parliament on Tuesday, February 11, will see several roads in the Corporate Area closed to pedestrian and vehicular traffic, beginning at 8 a.m.

* Duke Street - No vehicular traffic will be allowed on Duke Street, between Sutton Street and North Street.

* Mark Lane - Mark Lane will be operated as a one way (south to north), between Beeston Street and Charles Street.

Vehicles with George William Gordon House stickers will be allowed access to these areas.

JUTC buses which normally travel along Duke Street from East Queen Street to Heroes Circle, will be diverted as follows:

Traffic personnel will be deployed along the roadways and members of the public are being advised to follow their instructions.

Government Senator Dr Saphire Longmore is encouraging Jamaicans to be more compassionate towards mentally ill persons by trying to help them, rather than mistreating or shunning.

Longmore said the unfortunate reality is that persons living with mental illnesses are often the victims, rather than the perpetrators of violence.

She noted there was a need to bolster mental healthcare delivery by, among other things, providing adequate requisite resources.

Longmore said that many persons are diagnosed with and suffering from depression and post-traumatic stress disorder, which are mental health issues that are pervasive in the society, adding that there is no specific programme targeting these.

She therefore suggested the implementation of strategic plans for mental health which were initially presented in 1997, and came up again in 2006.

These propose an increase in the number of community health aides and mental health officers.

The app, which launched in December 2019, allows users to upload videos and photos of offences. Uploads include date, time and location stamps.

These are screened by the Transport Authority before being uploaded on the app, which can be downloaded from the Google Play Store.

Montague said there have been 1,700 downloads of the app to date, resulting in the prosecution of a number of PPV operators.

He informed that 12 road licences have been revoked, more than 40 warning letters served, and more than 90 meetings convened with taxi operators who were reported for road-traffic violations.

Jamaica will get four more Family Courts in St Ann, St Thomas, and Spanish Town and Portmore in St Catherine.

Justice Minister Delroy Chuck said this forms part of the conditions of European Union funding support, totalling approximately J$200 million, which is being provided to finance institutional strengthening in the justice sector.

The Family Court, which is governed under the Judicature (Family Court) Act, is responsible for all legal proceedings relating to family life, except for divorces. Its structure differs from the other courts, as it provides social services.