Thieves tie up farmer in pigsty - Animals butchered on spot 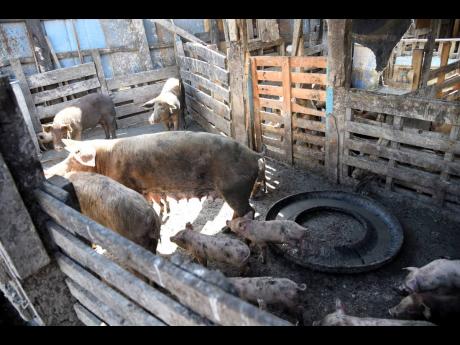 A pig farmer in Kingston was tied up in his pigsty by four men who stole two of his pigs, which they butchered on spot before disappearing with the carcasses.

The thieves reportedly entered the pigsty while the farmer was tending to his animals. Another farmer told THE WEEKEND STAR that she saw other people in the pigsty with him but she wasn't suspicious.

"Me neva did a tek notice a weh him up to," she said, adding that she thought the men were known to the farmer. The woman said that after she finished feeding her pigs she waited a while for her fellow farmer to exit his pigsty. However, when he finally did, his hands were tied behind his back.

"A me end up pull it. Dem just tek the pig and gone. When me find him, dem gone long time. Me neva see when dem a tie him up ... me just see when him come out," she told THE WEEKEND STAR.

Another farmer said that the pigs were butchered on spot by the robbers, whom he described as young men.

"Bwoy dem tie up the man like one a di pig dem ... me see dem but a nuff a dem and a just me one, so me couldn't help him," the resident said. He said that he saw four men.

"Dem tie him up and push him dung inna di pigsty ... Dem wrap a rope round him too, so him hand dem press dung inna him back," the man recounted.

He said that while the farmer was pinned down, the other two men grabbed two big hogs, ran through a fence and butchered them before fleeing the area.