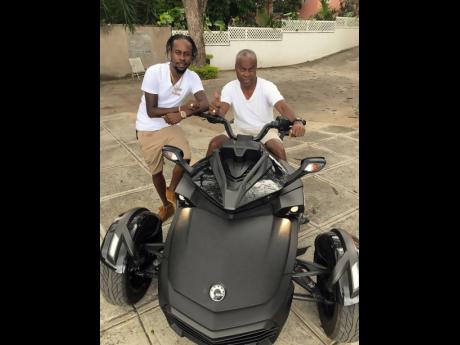 Popcaan and his lawyer Bert Samuels

Popcaan’s lawyer, Bert Samuels, says he wants to unequivocally deny that his client, Andre Sutherland more popularly known as Popcaan was held in possession of an illegal firearm.

This comes on the heels of a video now circulating on social media which shows the police conducting a search of the vehicle in which the 'Unruly Boss' was travelling.

Confirming that his client was indeed an occupant of the vehicle captured in the video, Samuels told THE STAR that the car was stopped by law enforcers for a road traffic violation. He explained that during this stop, another occupant of the vehicle declared he was a licensed firearm holder. Following that declaration, the lawmen asked everyone travelling in the vehicle to exit while they conducted checks.

Samuels said the firearm was “looked at and returned and nothing else happened at the scene.”

The lawyer said in subsequent talks with the deejay, Popcaan has expressed disappointment that “an incident free encounter with the police is being turned into a story with no foundation.”