One-Minute Read … News from around the world 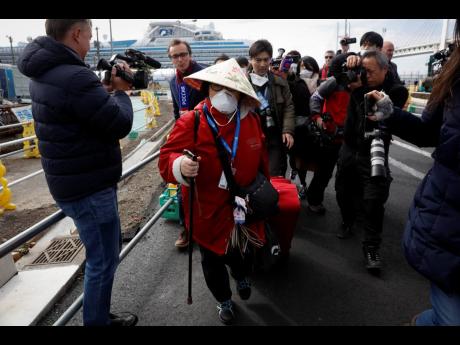 An unidentified passenger is surrounded by the media after she disembarked from the quarantined Diamond Princess cruise ship on Wednesday in Yokohama, near Tokyo. Passengers who tested negative for COVID-19 started disembarking.

About 500 passengers left the cruise ship Diamond Princess on Wednesday at the end of a much-criticised two-week quarantine aboard the vessel, docked in Japan, that failed to stop the spread of the new virus among passengers and crew.

The quarantine's flop was underlined as authorities announced 79 more cases, bringing the total on the ship to 621. Results were still pending for some other passengers and crew among the original 3,711 people on board.

Japan's Government has been questioned over its decision to keep people on the ship, which some experts have called a perfect virus incubator. The Diamond Princess is the site of the most infections outside of China, where the illness named COVID-19 emerged late last year.

Iranian authorities confirmed on Wednesday two cases of the new coronavirus, the first in the country, the semi-official ISNA news agency reported.

The report did not elaborate on the nationality of the two people infected. ISNA quoted an official in the country's health ministry, Kiyanoush Jahanpour, as saying that "since last two days, some suspected cases of the new coronavirus (COVID-19) were found."

Jahanpour did not say how many people were suspected of having the virus.

China on Wednesday said it has revoked the press credentials of three reporters for the US newspaper The Wall Street Journal over a headline for an opinion column deemed racist by the Government.

The headline on the newspaper's opinion column referred to the current virus outbreak in China and called the country the "Real Sick Man of Asia."

A Syrian passenger jet landed in Aleppo on Wednesday from Damascus, marking the resumption of domestic flights between Syria's two largest cities for the first time since 2012.

Meanwhile the government's onslaught continued nearby with air strikes reported in several rebel-held towns and villages.

The flight carrying Syrian officials and journalists was a symbolic message from President Bashar Assad's Government, days after its forces consolidated control over the northwestern province of Aleppo.

Backed by heavy Russian air strikes, Government forces have for weeks been conducting a crushing military campaign to recapture the Aleppo countryside and parts of neighbouring Idlib province in northwestern Syria, the last rebel-held areas in the country.

Yemen's Houthi rebels have blocked half of the UNs' aid delivery programmes in the war-torn country - a strong-arm tactic to force the agency to give them greater control over the massive humanitarian campaign.

The rebel group has made granting access to areas under their control contingent on a flurry of conditions that aid agencies reject, in part because it would give the Houthis greater sway over who receives aid, documents and interviews show.

The Houthis' obstruction has hindered several programmes that feed the near-starving population and help those displaced by the nearly six-year civil war, a senior UN official said.

"Over 2 million beneficiaries ... are directly affected," the official said.

The European Union (EU) unveiled proposals Wednesday to regulate artificial intelligence that call for strict rules and safeguards on risky applications of the rapidly developing technology.

The report is part of the bloc's wider digital strategy aimed at maintaining its position as the global pacesetter on technological standards.

Under the proposals, which are open for public consultation until May 19, EU authorities want to be able to test and certify the data used by the algorithms that power artificial intelligence in the same way they check cosmetics, cars and toys.