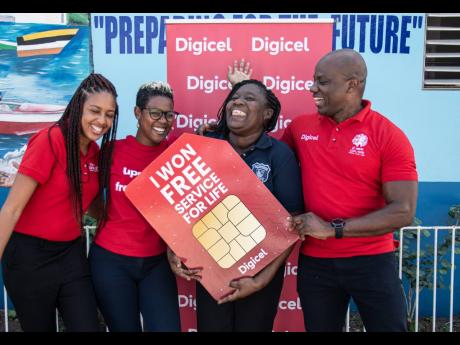 After simply upgrading to a free Digicel LTE SIM, fifty-three-year-old cook, Andrene Holness, later found out that she would no longer need to buy credit for the rest of her life.

Holness is the first winner in the Digicel 'Free Mobile Service for Life' promotion.

She received the best Valentine's Day gift ever when she accepted a call from a local radio station confirming that she had won the prize.

Still in disbelief when the Digicel team, led by Public Relations and Communications Manager Elon Parkinson, visited her workplace at the Old Harbour Bay Primary School recently, an elated Holness cheered, "This is a gift from God!"

Holness recalled, "I honestly thought it (the call) was a prank, even though the person who called insisted it was real. It's only after the call ended and someone told me they had heard me on the radio that I fully accepted it. I feel so special that God chose me for this prize" she said.

They all agreed that the prize was well deserved.

Bryan said, "The whole family is happy for her. First and foremost, my mother is a woman of God, she loves the Lord and she is active in the church, so it is not a surprise the Lord chose her for this blessing. She is an excellent mother and I believe she fully deserves it."

Parker-Gordon also conveyed her best wishes: "All of us were happy when we found out about Miss Holness' prize. My colleagues and I were just as surprised to hear that one of our own had been chosen. We congratulate her and we are very happy she has received this".

Presenting the symbolic giant SIM card to the long-standing Digicel customer, Parkinson noted, "This is a true double bonus for Miss Holness. After almost 19 years with Digicel, paying to top up her phone will be a thing of the past, plus, she now enjoys a superior service experience with her newly-upgraded LTE SIM. We wish Mrs Holness a lifetime of happiness while being always connected to friends, family and the things she loves."

Ten lucky customers will be chosen, one every two weeks.