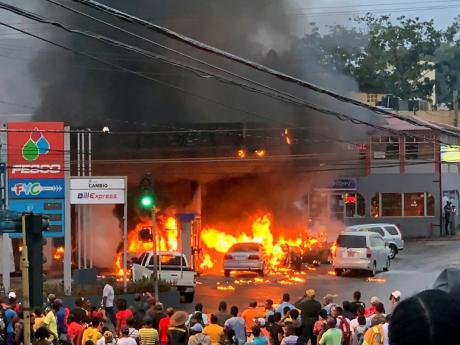 A large crowd gathered at the scene during the fire. 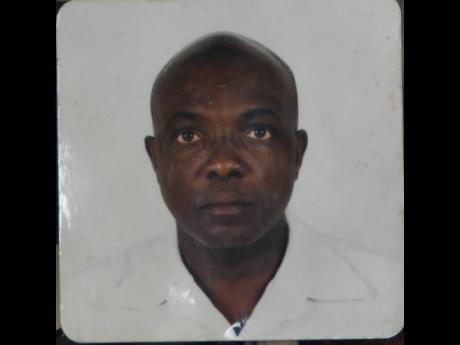 The wife of Daniel Farquharson, the man who died as a result of injuries he sustained in a gas station fire in Mandeville, is pleading for videos and pictures of her husband circulating on social media to be taken down.

Farquharson could be seen on videos with burnt patches on his body, the evidence of the horror he had experienced at the Heaven's FESCO gas station.

"I would want them to take it down. I don't want to remember him like that," Cheryl, Farquharson's wife of 20 years told THE STAR yesterday at the family home in Hopeton Pen in Hatfield district.

The pig farmer and mechanic died Saturday afternoon at the University Hospital of the West Indies after being transferred from the Mandeville Regional Hospital.

"He didn't get any help. Nobody was helping him, he was just there and they were just taking pictures, pictures! I heard that they were saying he was a madman that is why they didn't help him," the wife said." Instead of taking, you should be your brother's keeper first."

Far from the madman tag, according to her, Farquharson was a hard-working man who looked after his family.

"He is an extremely good father. Good provider, good husband, and trust me, right now I am wondering how I am going to manage. If I have a plumbing problem, he fixes it, he doesn't call anybody. He fixes everything," Cheryl said.

She was supported by her mother who also said Farquharson "took care of every need".

"Every evening like about 2 o' clock he would call on the phone and say: 'Cheryl, you go fi me baby'. Every time we would have the discussion and say Daniella is 18 years old and should can take taxi by herself. Him seh 'Cheryl, go fi mi baby'," the wife recalled as Daniella stood by her.

"According to him "is the last little one," she added.

Cheryl said she had no idea how she would be picking up the pieces after her husband's death.

"I can't even think about the funeral arrangement right now. I am just here thinking he would wake up and that it was not true," she said.