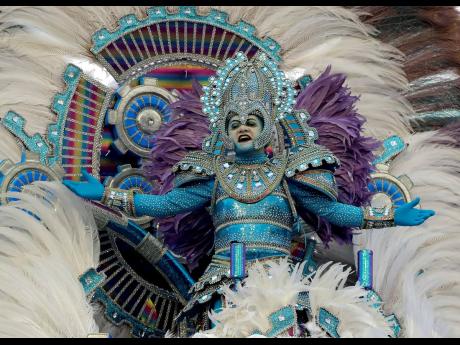 A dancer from the Rosas de Ouro Samba School performs on a float during a carnival parade in Sao Paulo, Brazil, yesterday.

One of the nine soldiers who were injured in the fireworks explosion last Saturday at a Guyana Defence Force (GDF) event has died.

In a statement on Sunday, the Ministry of the Presidency said Corporal Seon Rose, who was badly injured in the incident that occurred shortly after 1 p.m. (local time), died on Sunday at the Georgetown Public Hospital Corporation where he was receiving treatment.

The GDF says that Rose was injured when there was a spontaneous combustion as the soldiers were preparing for the fireworks display. That event was cancelled.

Canadian national dies while on vacation

The police have launched an investigation in an incident in which a Canadian national died while on vacation.

The police report that the unresponsive body of Agnes Cormack, 62, was fished from Pond Bay, in Virgin Gorda last Friday afternoon by the Virgin Islands Search & Rescue.

According to BVI News – the deceased woman and her husband have been sailing in the territory on a catamaran since February 16.

They said that the bodies of the unidentified couple were found in the small house after the fire had been extinguished.

Fire Services officials said that the fire had engulfed the small wooden building by the time two fire trucks had arrived and had been able to prevent the blaze spreading to nearby buildings.

One eyewitness said that a loud explosion was heard shortly before the blaze and thought it may have been a fireworks as part of the celebrations marking the island’s 41st anniversary of political independence from Britain.

Security for student returning from China

Security has been provided at the home of a Trinidad and Tobago student, who arrived from China last Friday, after threats had been made against the family over fears that the student may be carrying the deadly coronavirus (COVID-19).

Health Secretary Dr Agatha Carrington was quoted in media reports as saying that she is aware of the threats being made against the unidentified student and that 24-hour security had been provided at her home.

Carrington said all efforts are being made to deal with the situation and is urging people to “cease and desist” from spreading false information about the student, who tested negative on arrival here.

Health authorities said that the student would be monitored on a daily basis to ensure that she remains in good health.

Health authorities have sought to allay fears that there could be a further increase in tuberculosis (TB) cases in Dominica during the Carnival celebrations that end on Tuesday.

This after Health Minister Dr Irvine McIntyre confirmed that there had been a spike in cases so far this year.

Chief Medical officer, Dr David Johnson said that carnival activities on the weekend posed no threat to revellers and the disease was not new to the island.

McIntrye said that 12 cases of the disease had been recorded so far this year, with six other suspected cases.

Police Commissioner Chester Williams has confirmed that an investigation has been launched into allegations linking former national security minister, John Saldivar, to a bribery scandal involving an imprisoned American businessman dating back to 2013.

Last week, Saldivar’s successor, Michael Peyrefitte, told reporters that an investigation had been launched into the allegations after text messages surfaced in a Utah court showing that Saldivar had rejected a wire transfer and accepted to go to Miami to receive a sum of money.

Saldivar, who was placed on indefinite suspension by Prime Minister Dean Barrow earlier this month, has admitted that he took the money as campaign finances, but there have been calls for an independent investigation of the matter.