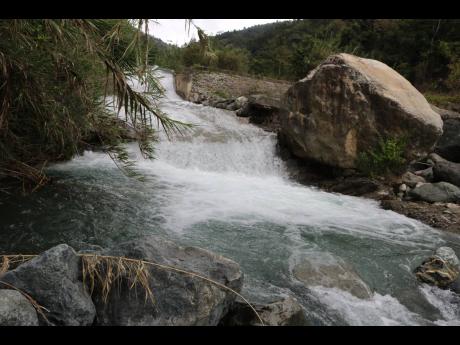 This photo shows the Yallahs River in St Thomas, when the flow was brisk. These days, it has been reduced to a trickle.

If you should go for a splash in the Yallahs River these days, you may struggle to find a pool big enough to accommodate you, let alone a group of your friends.

This is because the water level has got very low in recent years, thanks to persistent drought and destruction of the watersheds.

"It is very, very low. There are hardly any fish in it. Gone are the days when persons can catch janga and fish because there is just hardly any water," Llandewey resident Patrick Ogilvie said.

"We use to the river for irrigation but all of that is done with now. Usually ever year, the river will get low but it always full up back, but for almost two years it has been like this. We don't have a good domestic water system so this impact my business somewhat because if I didn't have other sources of getting water for my crops, I would be in problem," the farmer said.

Somerset Falls went dry last year, forcing a shutdown of the attraction for a few weeks.

Peter Clarke, managing director of the Water Resources Authority, said climatic conditions and destruction of the watershed are the major contributors to the drying up of rivers, particularly on the south of the island.

"Some of the rivers are showing lower over the years," Clarke said, adding that the low flow being experienced is a result of the drought that Jamaica experienced last year "that we haven't really recovered from".

"The rivers have gone lower over the years, but there is no significant drop in the last year, other than the fact that last year there was no rainfall and this year is looking like no rainfall again," he added.

Evan Thompson, head of the Meteorological Service Division, told THE STAR that drought conditions are being experienced in the eastern section of the island.

"We are still in the dry season, we are going now into the traditionally driest month of the year, which is March, so we could be seeing more drying and increase in the number of parishes experiencing drought," Thompson said. "The forecast is that it will not actually become as bad as it was in 2019."