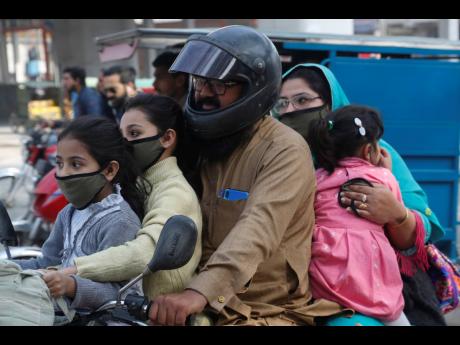 A Pakistani family wears face masks to help prevent exposure to the new coronavirus as they travel on a motorbike in Lahore, Pakistan, yesterday. 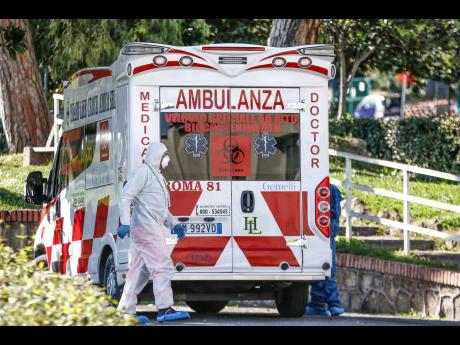 A high biocontainment ambulance arrives at the Columbus Covid 2 Hospital in Rome, yesterday. At the Gemelli university polyclinic 21 new ICU units and 32 new beds for infective disease were opened as part of the new Columbus Covid 2 Hospital, an area fully dedicated to the COVID-19 cases in order to support the regional health authorities in containing the pandemic. 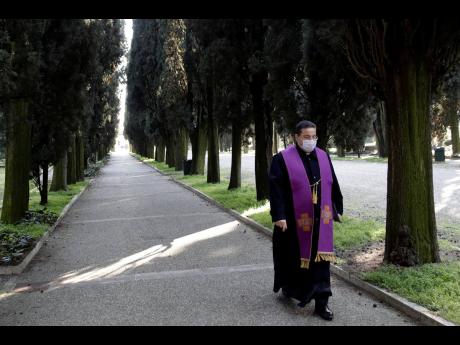 A priest wearing a mask walks in the Vantiniano cemetery in Brescia, Italy, Monday, March 16. For most people, the new coronavirus causes only mild or moderate symptoms. For some, it can cause more severe illness, especially in older adults and people with existing health problems. Italy recorded 368 deaths in 24 hours due to coronavirus, bringing the total number dead to 1,809. In Spain, the death toll doubled in a day. 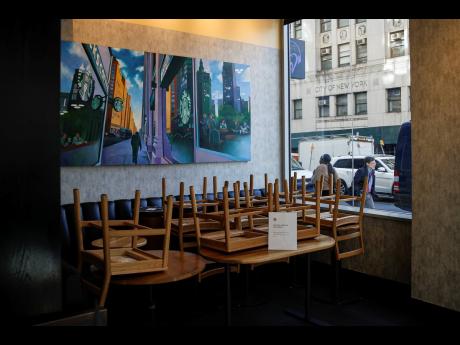 Chairs are stacked in a Starbucks coffee shop that remained open for customers purchasing for take-away in New York yesterday.
1
2
3
4

New York took a series of unprecedented steps on Sunday to slow the spread of the coronavirus, including cancelling schools and extinguishing most nightlife in New York City. The city joined with Connecticut and New Jersey to close bars, restaurants and movie theatres starting Monday night.

The governors said restaurants and bars will move to takeout and delivery services only.

"Our primary goal right now is to slow the spread of this virus so that the wave of new infections doesn't crash our health care system, and everyone agrees social distancing is the best way to do that," Govonor Andrew Cuomo said.

Iran yesterday reported another 129 fatalities from the new coronavirus, the largest one-day rise in deaths since it began battling the Middle East's worst outbreak, which has claimed more than 850 lives and infected a number of senior officials in the country.

Businesses in Iran's capital remained open, however, even as other countries in the region moved towards full lockdowns, with Lebanon largely shutting down and Iraqis racing to prepare for a curfew set to begin later this week.

The divergent approaches adopted by local authorities reflect continued uncertainty over how to slow the spread of a virus that has infected around 170,000 people worldwide and caused more than 6,500 deaths.

More than half of African countries impacted by coronavirus

The coronavirus has now been confirmed in at least 30 of Africa's 54 countries, officials said Monday, and regional power South Africa warned of a new crisis once the virus begins to spread at home and into crowded low-income communities.

The most alarming confirmation of a first case came from Somalia, the Horn of Africa nation with one of the continent's weakest health systems after nearly three decades of conflict. Tanzania, Liberia and Benin also announced their first cases.

African nations have begun imposing travel restrictions as many confirmed cases come from abroad. Algeria cut off all air and sea contact with Europe, effective Thursday.

South Africa announced it will revoke nearly 10,000 visas issued to people from China and Iran, two of the hardest-hit countries, in January and February. It also will require visas from several hard-hit countries that had been visa-free, including the United States and Italy.

Company denies claims that Trump sought to by vaccine

A German company working on a potential vaccine for the new coronavirus denied reports Monday that the U.S. Government was angling to acquire it, while German officials sought to ease tensions fuelled by the story by insisting the firm would stay in the country.

On Sunday, Germany's Welt am Sonntag newspaper, citing unidentified German Government sources, reported that the then-boss of CureVac took part in a meeting between pharmaceutical managers and U.S. President Donald Trump in early March. It said Trump apparently was offering the German firm a large amount to secure its work for the U.S.

In a tweet Monday, CureVac confirmed it had been one of the companies at the meeting, but said the media reports about an offer were incorrect.

"CureVac has not received from the U.S. Government or related entities an offer before, during and since the task force meeting in the White House on March 2," the company wrote.

CureVac on Sunday called the reports "speculation," issuing a statement saying that it was working to develop a vaccine and was in contact with a global alliance called the Coalition for Epidemic Preparedness, "and many other organizations and authorities worldwide."