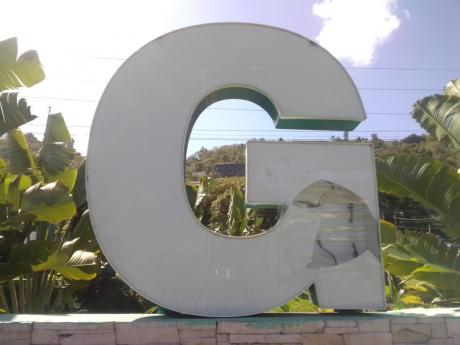 The ‘G’ in the controversial Welcome to Montego Bay has been damaged. 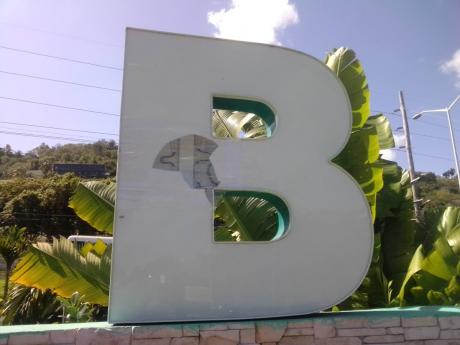 The ‘B’ in the ‘Welcome to Montego Bay’ sign has also been damaged. 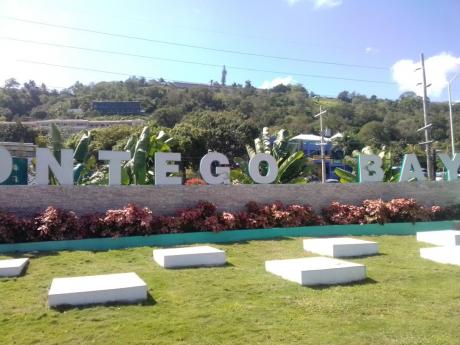 The first indication that the controversial $17-million welcome sign at the Sangster's International Airport roundabout in Montego Bay, St James, may not be value for money has appeared.

Two massive holes, thought to be the result of stone-throwing vandals, are in two of the letters that was constructed using materials resembling plexiglass.

Ian Wright, a Montego Bay businessman, has called on the authorities to speed up their investigations into finding those responsible for defacing the sign and immediately bring them to justice.

THIS IS SO WRONG

"This is a national disgrace, and until persons in this country start feeling the full brunt of the law will they truly learn that actions such as this is so wrong," a peeved Wright said.

"Whether it be a sensible individual, or a madman, this persons must be caught, arrested and charged."

At the time of its construction last year, critics said that it was scandalous to be spending so much money on a 'Welcome to Montego Bay' sign. However, Tourism Minister Ed Bartlett said it would be an iconic attraction for the tourist centre.

The new, fancy, glasslike sign, complete with lighting, replaced a previous concrete 'Welcome to Montego Bay' sign, which was destroyed in March 2018 by a vehicle that got out of control and crashed into it.

"Those who think it was a scandal, I say to them the real scandal is the beauty that is there and the shame that those who might have expressed otherwise when Jamaica needs something as beautiful as that," he said.

Like Wright, several Montegonians are condemning the action of the person or persons who are defacing the multimillion-dollar sign, even as they question whether the money spent on the project could not have guaranteed the sign's durability.

"From the beginning mi know seh the sign was a joke," one transport operator said. "How is it possible that someone can spen over $17million pon a little sign weh a man can just walk up to an mash up wid a stone?"

"When a man or a government spend $17million pon a sign, it fi have proper structure and proper security, because a taxpayer money help build it," he added.