In drastic step, Italy shuts most factories to halt virus 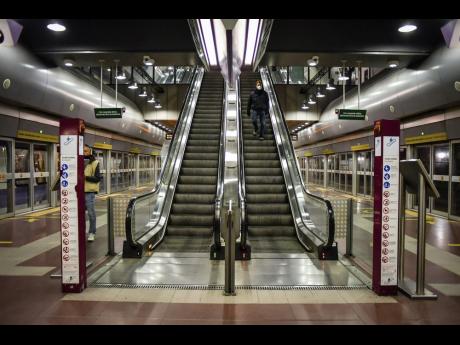 FILE - In this Wednesday, March 11, 2020, a man wearing a mask descends an escalator at a deserted subway station in Milan, Italy. The eurozone's third-largest economy and a major exporter, Italy on Wednesday becomes the first western industrialized nation to idle swaths of industrial production to stop the spread of coronavirus by keeping yet more of the population at home. The new coronavirus causes mild or moderate symptoms for most people, but for some, especially older adults and people with existing health problems, it can cause more severe illness or death. (Claudio Furlan/LaPresse via AP)

Soave, Italy (AP) — Italy has become the first western developed nation to idle most of its industry to halt the spread of the coronavirus, in a potential cautionary tale for other governments, such as the Trump administration, that are resisting such drastic measures.

After more than two weeks of a nationwide lockdown, the Italian government decided to expand the mandatory closure of nonessential commercial activities to heavy industry in the eurozone’s third-largest economy, a major exporter of machinery, textiles and other goods.

The move by Italy, which is leading the globe in virus deaths, is more in line with draconian measures taken by China than with declarations coming out of other democratic partners, who are at least a week or two behind Italy’s rate of virus infections.

The government decree mandates the industrial shutdown for one week, but as with the rest of the harsh containment measures they are likely to be extended depending on the pace of contagion.

It’s a sobering prospect for other countries in Europe and for the United States, where President Donald Trump has said he aims to have commercial businesses reopen by mid-April, despite warnings from health experts that that is unlikely. There has been no discussion of closing U.S. manufacturing as a nationwide measure.

The industrial closures put in stark contrast concerns over protecting lives in a country with an especially vulnerable ageing population against fears of hurting an economy that already was on the brink of recession.

Unions in Italy have fought especially hard to have more sectors considered nonessential in order to protect workers. They won limits on activity at call centers as well as the production of wood and plastic packaging, paper and chemical products.

In all, hundreds of thousands of small, medium-sized and large companies will be closed, with workers receiving partial salaries under short-term unemployment schemes that have been extended to even the smallest businesses.

The big concern for the small and medium-sized company owners that power Italy’s economy is how long the shutdown will last, and how hard that will hurt cashflow and hinder a smooth return to business.

“If the shut-down is two or three months, it might be as simple as turning a light back on, because supply chains and logistics are very efficient,” said Carlo Salvato, an expert in small and medium business at Bocconi University. ’’But if the shutdown is longer and precipitates a deep slide in wealth, the patterns of consumption could change dramatically.”