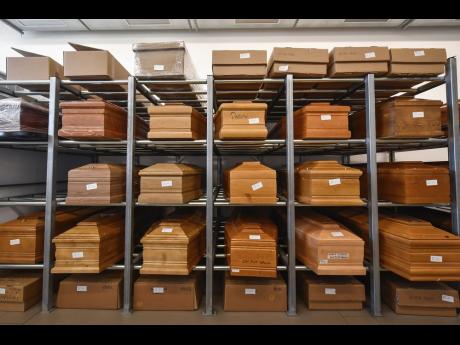 FILE - In this March 23, 2020 file photo, coffins are placed on scaffolding in the Crematorium Temple of Piacenza, northern Italy, awaiting cremation due to the coronavirus emergency. Italy is seeing a slight stabilizing in its confirmed coronavirus infections two weeks into the world’s most extreme nationwide shutdown, but the virus is taking its silent spread south after having ravaged the health care system in the north. For most people, the new coronavirus causes only mild or moderate symptoms. For some it can cause more severe illness, especially in older adults and people with existing health problems. (Claudio Furlan/LaPresse via AP)

Doctors and nurses in Italy’s overwhelmed northern hospitals have welcomed a slight stabilizing in the number of coronavirus infections but fear the virus is still silently spreading in the south two weeks into the West’s most extreme nationwide shutdown.

As the dead in Italy keep piling up, virologists warn that the actual number of Italy’s positive cases is up to five times as high as the official count of 80,539. That means infections will still climb even with Italians ordered to stay home for all but essential activity.

Italy, the epicenter of Europe’s pandemic, has by far the most virus deaths of any nation in the world, a grim tally of 8,165. On Friday, Italy is on track to surpass China in its infection count and have the most cases of any nation behind the U.S.

"It is something devastating,” said the Rev. Mario Carminati, who has turned over a church in the tiny Lombard town of Seriate to host coffins before they are taken by military convoy to be cremated. This week, dozens were lined up in two neat rows down the central aisle, and were immediately replaced by new ones when they were taken away.

Despite the toll, officials have also expressed cautious optimism that the exponential spread of the virus is starting to slow in the hard-hit north, thanks to two weeks of military-enforced stay-at-home orders. For several days this week, new infections and deaths showed signs of slowing down, and emergency rooms weren’t seeing the tsunami of sick that characterized the first weeks of the pandemic following Italy’s first positive test Feb. 20.

Some 500 medical personnel at the hospital are infected.

Italy’s high death toll and aggressive spread of the virus has led Italian epidemiologists to estimate that the true number of infected could be as high as 450,000, and that under-testing is putting Italians at risk of further contagion. Currently, Italy only tests people showing symptoms, because its labs cannot process any more, and to date more than 360,000 tests have been performed.