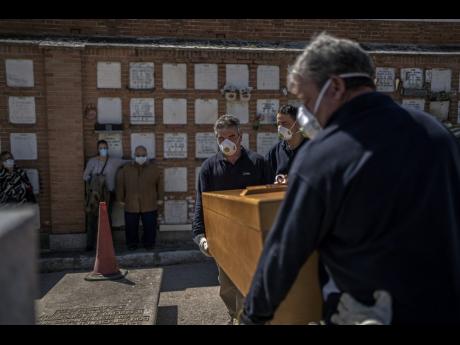 The daughter and husband, center left, no names available, of an elderly victim of the COVID-19 stand as undertakers place the coffin in the grave at the Almudena cemetery in Madrid, Spain, Saturday March 28, 2020. In Spain, where stay-at-home restrictions have been in place for nearly two weeks, the official number of deaths is increasing daily. The new coronavirus causes mild or moderate symptoms for most people, but for some, especially older adults and people with existing health problems, it can cause more severe illness or death. (AP Photo/Olmo Calvo)

Millions of Americans will be infected by the coronavirus and 100,000 to 200,000 will die, the U.S. government’s top infectious-disease expert warned Sunday, as people in and around the country’s outbreak epicenter of New York were urged to limit their travel to contain the scourge.

The dire prediction came from Dr. Anthony Fauci, director of the National Institute of Allergy and Infectious Diseases, speaking on CNN’s “State of the Union.” As of Sunday morning, the U.S. had about 125,000 infections and 2,200 deaths.

Around the world, doctors were forced to make tough choices about which patients to save with their limited breathing machines, and Spain and Italy demanded more European help as they fight still-surging coronavirus infections in the continent’s worst crisis since World War II.

The confirmed global death toll surpassed 31,000 and new virus epicenters emerged in U.S. cities like Detroit, New Orleans and Chicago. Even rural America has not been immune, as virus hotspots erupt in Midwestern towns and Rocky Mountain ski havens.

Spain and Italy alone account for more than half of the world’s death toll, and are still seeing over 800 deaths a day each.

Spain, Italy, France and six other EU members have asked the union to share the burden by issuing European debt, dubbed coronabonds, to help fight the virus. But the idea has met resistance from Germany and the Netherlands.

European countries have also resisted sharing masks with their neighbours for fear that they, too, will need them in mass quantities soon. Many countries have turned to China, where the outbreak is easing, flying in cargo planes to get protective medical equipment.

These tensions have raised new fears about whether the EU will survive this crisis.