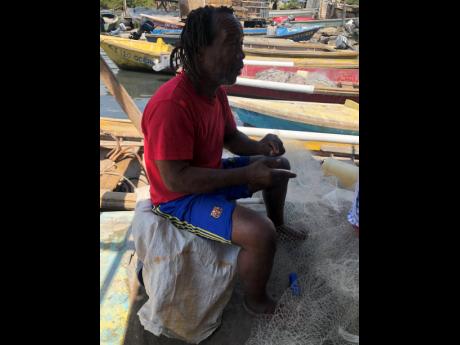 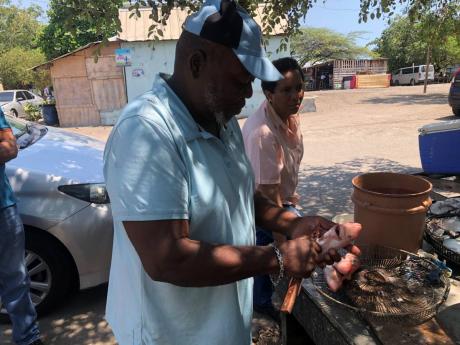 Alan Walker scales fish, as he prepares for what few customers he's been getting lately.
1
2

If fish vendors could give up one thing for Lent, it would be the coronavirus.

The virus swooped in at the least ideal time, raining on their parade. Lent is often referred to as the fisherman's season, as people usually give up meat and go for fish.

Even Easter, which follows Lent, is a time for fish and bun in Jamaica.

Alan Walker has been selling fish at the Greenwich Town Fishing Beach, off Marcus Garvey Drive, for five years. He told THE STAR that it's a rough time to be a fish vendor.

"Fish is not selling! Right now, since the corona, you come out a daytime and you only sell like two pound and four pound, while I used to sell a 30 or 40 pound a day. Fish would be going. Last Lent was beautiful. I didn't even have enough fish to sell," he said.

Walker said he has to remain motivated, as this is his only source of income.

"Regardless of what happens, I still have to come out because this is my livelihood. The only way you don't come is if the government put a stop to it. We still have to put in the work because we don't know what to expect," he said.

Junior Shaw, 63, has been in the fishing business since he was just 13. When asked about the current condition of the market, he replied, 'A fus me a experience this.'

"This is a big decrease, because me a sell and nobody nah buy! It wicked ... me a go sea go catch fish and nobody nah come buy," he told THE STAR. "People woulda all a buy up fish and a store, but everybody 'fraid now."

Winston Monroe, chairman of the Greenwich Town Fisher Folk Benevolent Society, emphasised the struggle of fishermen during the coronavirus pandemic.

"One and two people still come in and buy, but not as much as before. Fishermen are still coming and catching fish. They are going to the markets and selling them, but it's rougher," he said.