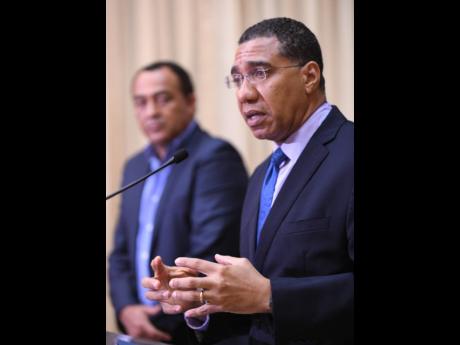 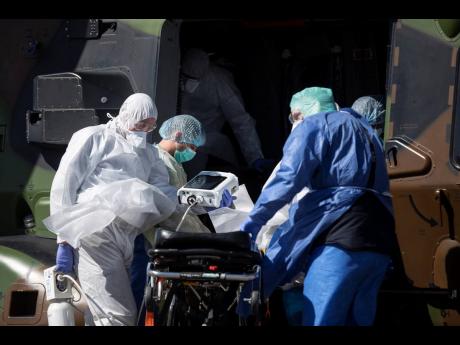 A patient infected with the Covid-19 virus is loaded into a French military helicopter yesterday. The chopper was heading to the Saint-Gall hospital, Switzerland, as hospitals in eastern France struggle to deal with the high number of cases.
1
2

Jamaica could have just under 590,000 COVID-19 cases before the end of April if Jamaicans fail to act in a responsible manner to contain the virus that has brought much of the world's economies to a grinding halt.

The country has recorded 36 cases thus far, the first of which was detected 20 days ago, but Prime Minister Andrew Holness said it appears "There might be a sense of complacency setting in", and this could create a window for the virus to overwhelm the population.

"It might be that the population is believing that this will be how it will be for the next two or three weeks," Holness said yesterday as he pointed to the Health Ministry's projection of best and worst case scenarios.

Doubling of the cases

Jamaica is currently on a trajectory that projects a doubling of the cases every eight days. Dr Jacquiline Bisasor McKenzie, the chief medical officer, said that if this happens, the health system would be able to manage the COVID-19 outbreak. However, she warned that the country could see a doubling of the case every two days, resulting in 4,608 cases by April 12, if persons do not take their responsibilities seriously and stay home.

The ministry's worse case scenario is that if COVID-19 cases double every two days, Jamaica could have some 589,824 cases by April 26.

However, if social distancing and other preventative mechanisms are employed, Jamaica could have 432 cases by April 26, providing the numbers double every eight days, which would be on the current trajectory. A doubling of the numbers every 10 days could see Jamaica with a manageable 259 cases by April 26.

"Our fear is that the unknown cases that have come into the island, if they are not quarantined, they could cause a massive outbreak," Holness said. Some 2,000 persons came into the island between March 18 and the imposition of a travel ban on March 24, many of whom appear to have been ignoring repeated instructions from the Government to remain at home for 14 days.

Meanwhile, as the Government pushes to maintain social distance and to have Jamaicans stay home, Prime Minister Holness yesterday announced the imposition of an all-island curfew, starting at 8 p.m. each day and ending at 6 a.m., effective April 1 for seven days. The measure will not apply to people who work in the BPO sector as well as members such as the essential servives such as doctors, nurses, and members of the security forces.

"We need every single individual to act responsibly," Holness said.

The prime minister said that the police will increase their vigilance and prosecution of persons who have been disobeying the orders that have been put in place to contain the spread of the novel coronavirus.