5,100 travellers can’t be found - PM says they pose one of the biggest threats for spike in coronavirus numbers 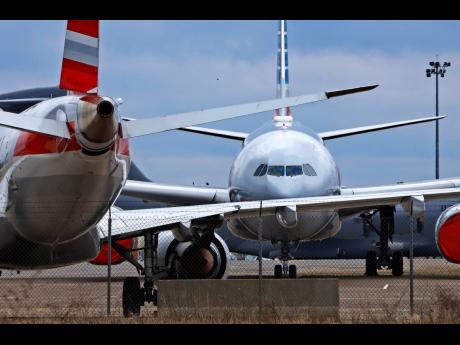 American Airlines planes are parked at Pittsburgh International Airport yesterday. The Jamaican Government is trying to track down more than 5,000 people who came into the island between March 18 and 23 as it seeks to contain the spread of the novel coronavirus.

An estimated 5,100 people who came into the island between March 18 and 23 cannot be located.

Some of the persons, despite being required to self-quarantine for 14 days, are reportedly interacting with the general population, raising the possibility that they could be transmitting the novel coronavirus, if they are infected.

Prime Minister Andrew Holness, speaking in Parliament yesterday, said that 7,000 persons entered the island between March 18 and 23 when the ports were closed to incoming passenger travel. He said that 1,500 of these persons left the island.

Persons who arrived during the period are required to contact the Health Ministry and to remain at home for the quarantine period. However, up to yesterday, only about 400 people have contacted the Ministry of Health.

He said that some of the persons who came into the island may have contracted the disease and are infecting others.

"We could have several clusters of infections developing right across the island and we don't know, and then all of a sudden we see a surge in the numbers," Holness said.

The prime minister said that persons who come into the island and have not self-quarantined "pose one of the biggest threats at this time".

These persons have been warned that they can face fines of up to $1 million or 12 months' imprisonment, under the Disaster Risk Management Act, if they are convicted.