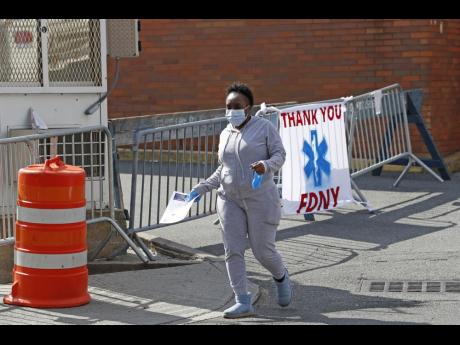 A woman leaves Elmhurst Hospital Center after being tested for COVID-19 or coronavirus during the current viral pandemic, Tuesday, April 7, 2020, in the Queens borough of New York. The new coronavirus causes mild or moderate symptoms for most people, but for some, especially older adults and people with existing health problems, it can cause more severe illness or death. (AP Photo/Kathy Willens)

New York City’s death toll from the coronavirus has been disproportionately high in black and Hispanic communities, and the city is starting an outreach campaign for those residents, Mayor Bill de Blasio said Wednesday.

“We’re seeing folks who have struggled before really being hit particularly hard,” de Blasio said at a City Hall briefing.

De Blasio said of the racial disparities: “It’s sick. It’s troubling. It’s wrong. And we are going to fight back with everything we’ve got.”

State health officials reported Tuesday that more than 4,000 people have been killed by the virus in New York City. The city’s new round of data is based on a smaller number of cases, about 1,600, where the race and ethnicity of the victim is known.

De Blasio said the city would embark on a multimillion-dollar public service campaign to reach non-English speaking communities with information about the virus.

Cuomo, speaking separately later in the day, said he also was troubled by the disparities and will order more testing in minority communities.

“Why is it the poorest people always pay the highest price?” Cuomo asked. “But let’s figure it out. Let’s do the work. Let’s do the research. Let’s learn from this moment.”