16.8M Americans thrown out of work as economic toll rises 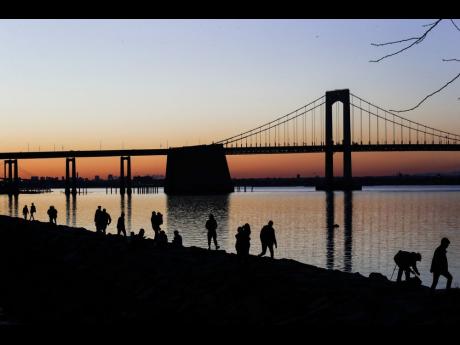 People gather to watch the sun set behind the Throgs Neck Bridge at LIttle Bay Park Wednesday, April 8, 2020, in the Queens borough of New York. While New York Gov. Andrew Cuomo said New York could be reaching a "plateau" in hospitalizations, he warned that gains are dependent on people continuing to practice social distancing. (AP Photo/Frank Franklin II)

NEW YORK (AP) — A staggering 16.8 million Americans have been thrown onto the unemployment rolls in just three weeks, underscoring the terrifying speed with which the coronavirus outbreak has brought world economies to their knees.

Meanwhile, world leaders and health officials fervently warned that the hard-won gains against the scourge must not be jeopardised by relaxing social distancing during Easter weekend, one of the busiest travel times of the year on the Continent. Authorities around Europe banned holiday travel and set up roadblocks.

Numbers released Thursday by the world’s largest economy showed that 6.6 million American workers applied for unemployment benefits last week, on top of more than 10 million in the two weeks before that.

That means more than 1 in 10 U.S. workers have been forced out of a job since the crisis took hold, the biggest, fastest pileup of job losses since record-keeping began in 1948.

The real numbers could be even higher because state unemployment offices around the country have been overwhelmed with claims, and some people have been unable to get through by telephone or website. And still more job cuts are expected.

The U.S. unemployment rate in April could hit 15% — a number last seen at the tail end of the Depression.