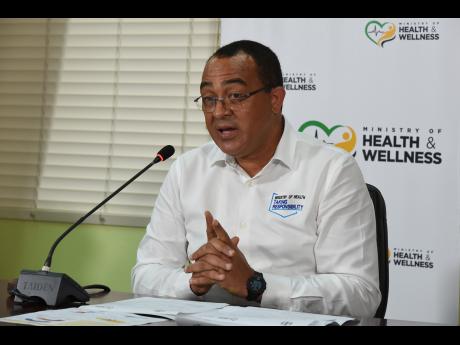 The Government is thinking about building a new health facility on the grounds of one of the country's existing hospitals instead of going ahead with its plan to set up a 72-bed field hospital at the National Arena in St Andrew.

Speaking at a press conference on Wednesday, Health and Wellness Minister, Dr Christopher Tufton, said that although the contract has been signed for the field hospital, the matter is being discussed internally as to whether to continue with the plans.

"One of the things I have said to the team is that we should look at the existing contract or arrangements in terms of expenditure and look at an existing hospital and see if we could add a facility so that after COVID-19 you would still have the facility as opposed to going to the National Arena and building out something that you may have to dismantle over time," he said.

Tufton said the Government does not want to build the field hospital and have it become another "white elephant”.

"First of all, we don't want it to be something that we spend money on and is not being used over time," he emphasised.

At the same time, Tufton said there are concerns that as the country moves forward with the new normal way of living with the coronavirus (COVID-19), and as the border reopens and movements become unrestricted, the risks associated with the virus will be greater.

"We are seeing evidence of that with the controlled re-entry where we are seeing a number of persons testing positive," Tufton said, adding that 15 repatriated Jamaicans have tested positive for the virus so far.

Therefore, he said, the secondary health system has been expanded to include more wards to deal with the virus.

The proposed field hospital will be used as an isolation facility and will respond to any surge in the cases.