PM to provide timeline for return of all Jamaicans at sea 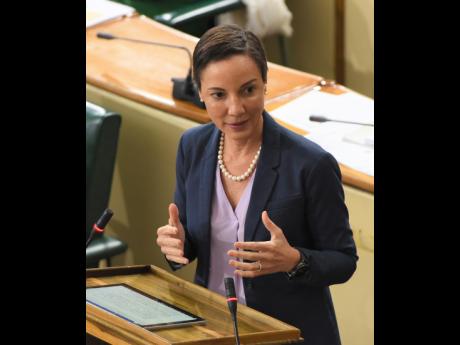 Minister of Foreign Affairs and Foreign Trade, Senator Kamina Johnson Smith, delivers a statement during Friday’s sitting of the Senate.

Prime Minister Andrew Holness is expected to update the nation on the timelines for the return of all Jamaicans on cruise ships.

Minister of Foreign Affairs and Foreign Trade, Senator Kamina Johnson Smith, made the disclosure while responding to questions following a statement in the Senate on Friday.

The statement provided an update on the activities and actions of the Ministry in support of Jamaicans overseas, who are affected by the closure of the country’s borders to incoming passengers, due to COVID-19.

Royal Caribbean’s Adventure of the Seas, with 1044 Jamaican crew on board, docked at the Falmouth cruise ship pier in Trelawny on Tuesday, with the first 200 workers disembarking the vessel on Thursday.

“The Government is working on scheduling the repatriation of the remaining seafarers out there and again, this is across nine ship lines and I would say easily, more than 115 ships, some of which are being consolidated even as we speak,” Johnson Smith said.

Ship workers, who test positive for COVID-19 will go into State quarantine, while those who test negative will be allowed to self-quarantine at home for 14 days.
Persons in home quarantine will have their location tracked and must do video check-ins multiple times a day.

Senator Johnson Smith said the Government is committed to bringing all nationals home in a safe manner, which protects the safety and health of the entire population.

“We have never refused any ship, let me state that for the record. We have not taken any action, which is in breach of the international maritime  labour convention and this is in fact one of the issues, which we raised with the shipping lines, even as we express our appreciation for their adherence to the convention, by taking due care of our nationals while they have ceased to operate and ensuring that they are returned to their home port, as required under the convention,” she noted.