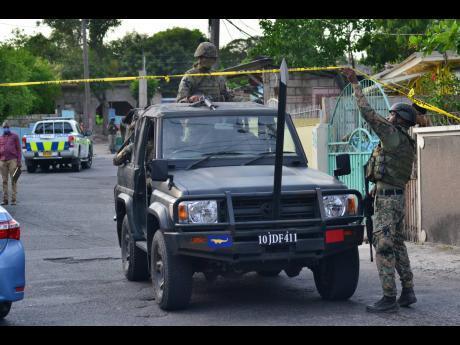 Soldiers leave a crime scene where a disabled August Town woman was shot and killed during a police-military operation on Wednesday, May 27, 2020 - Kenyon Hemans photo

The Jamaica Defence Force (JDF) says it is currently conducting a probe into the shooting death of a woman during a police-military operation in August Town, St Andrew on Wednesday.

THE STAR understands that 44-year-old Susan Bogle was shot as police and soldiers chased wanted men through the yard where she lived.

"Dem say a three shots she get, but even if dem see man a run, as dem claim, when dem buss her door and dem fire one time and dem realise say a di wrong person why fire two more shots. She alone was in her room, enuh," Grace Freckelton said.

It is further reported that Bogle was shot multiple times and was subsequently rushed to The University Hospital of the West Indies, in the company of her son, where she was pronounced dead.

In addition to conducting its own internal investigation, the JDF says it is cooperating with the Independent Commission of Investigations (INDECOM) and the Jamaica Constabulary Force (JCF), which have commenced investigations into the incident.

The JDF is encouraging persons who may have information concerning this incident to contact INDECOM, the JCF or the JDF at its tip line 876 837-8888.