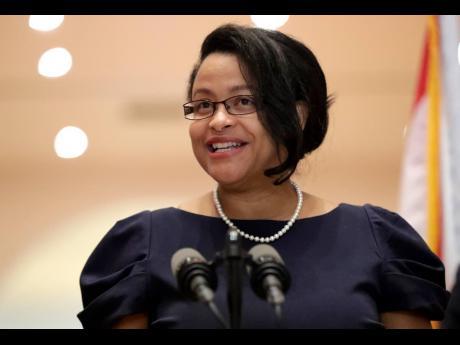 Judge Renatha Francis smiles as she speaks during a news conference at the Miami-Dade Public Library on Tuesday. Governor Ron DeSantis appointed two South Floridians to the state Supreme Court on Tuesday, including Francis, a Palm Beach County circuit judge who immigrated from Jamaica.

History was made in Florida when Renatha Francis became the first Jamaican ever to be appointed to the Florida Supreme Court.

Florida Governor Ron DeSantis made the announcement yesterday at a news conference in Miami.

Francis currently sits as a trial judge on the 15th Circuit Court in Palm Beach, a position to which she was appointed in 2019. Prior to that, she served as a county court judge in Miami Dade County.

Judge Francis also served as an attorney for the first District Court of Appeal in Tallahassee from 2011-2017.

In making the announcement, DeSantis said that “Judge Francis has demonstrated a strong commitment to the rule of law as well as to the judicial craft”.

The appointment of Francis was one of two made by the governor to fill vacancies on the Florida Supreme Court.

The another appointee is John Couriel, an attorney of Cuban heritage.

Judge Francis will take up her appointment as a member of the Florida Supreme Court in September.

Florida requires that someone appointed to the Supreme Court be a member of the Florida Bar for 10 years, a milestone Judge Francis will achieve in September this year.

“Her years of experience prior to being a county, and then a circuit judge, as well as her experience on the Bench makes her well equipped to be able to be a great justice on the Florida Supreme Court,” he said.

Judge Francis said she was honoured and humbled by the appointment “and the confidence that you have shown in giving me this tremendous opportunity to serve the people of the great state of Florida”.

Born and raised in Jamaica, she grew up in Portmore and attended St Hugh’s High School. She read for her bachelor’s at The University of the West Indies, graduating in 2001, before studying law at the Florida Coastal School of Law.

Before moving to Florida in 2004, she operated two businesses in Jamaica, a bar and a trucking company, prior to becoming an attorney.

“Another Jamaican has made her mark on the international scene and we are extremely proud and extend our heartiest congratulations to her,” said Mair.