More ship workers processed on May 28 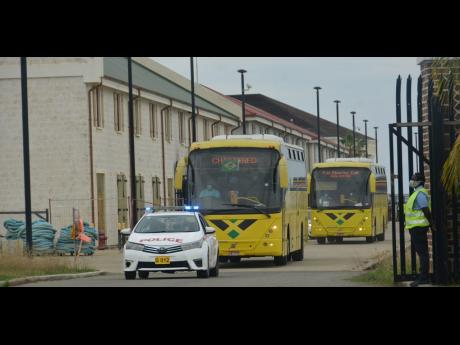 Regional Director of the Western Regional Health Authority (WRHA), Errol Greene, says the 172 Jamaicans who were processed on May 28, following disembarkation from the Norwegian vessel, Marina, are in good spirits and happy to be home.

“The processing, which involved various health tests, customs and immigration… went very well,” Greene said, adding those whose tests are negative will be sent home for the 14-day self-quarantine, and those tested positive will be quarantined in a government facility.

He said the mood of the workers was one of joy and an appreciation of the fact that efforts were made to bring them home safely, in good health and an opportunity to be reunited with their loved ones.

He added that while his main focus was on the Jamaican returnees, he was also aware of efforts to have a number of Colombians on board one of the vessels sent home via an arranged flight.

“There are other nationals on board both ships who will remain on board and leave whenever both vessels depart,” he added.

Prime Minister Andrew Holness, revealed earlier in the week that “as we have done before with other overseas nationals aboard ships that have docked in Jamaica”, 180 Colombian nationals will be transported via a secure corridor to a waiting charter flight at Sangster International Airport to be flown back to Colombia.

Persons who are allowed to quarantine at home have consented to have their locations geofenced, using smart technology through the JamCovid19 app and to do a video check multiple times per day while in quarantine.

A Disney vessel is tentatively slated to berth on May 29 with another batch of more than 400 crew members. The protocols and procedures now established by the Government will be used to land the incoming ship workers.