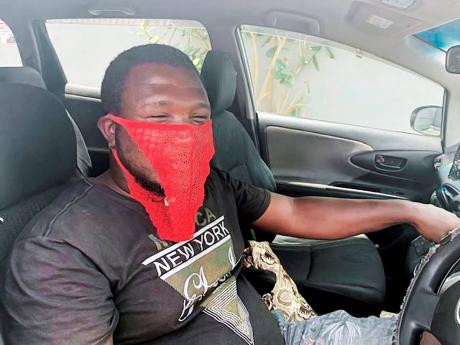 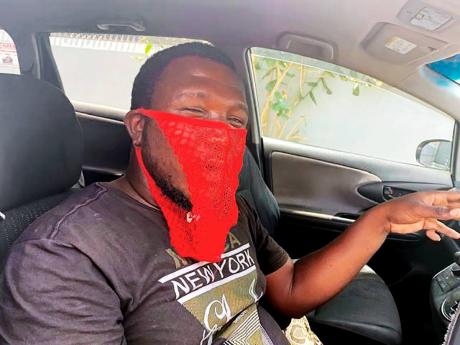 When Prime Minister Andrew Holness ordered that all persons should wear a mask in public as one of the COVID-19 measures, one taxi driver believes a brand new pack of G-string panties is enough to provide him with all the protection he needs.

Nicosi 'Jubba' McLarty, who plies the Half-Way Tree to downtown Kingston route, says he has been turning heads and making people laugh whenever he wears his 'mask' in public.

A multi-coloured G-string hangs around his rear view mirror. He slips on a red one over his face before telling the news team that in addition to following protocols and protecting himself from coronavirus, he likes to entertain his passengers with his comical antics.

Mi is a comedian

"Mi just love to make people laugh. Mi is a comedian. A probably four years now mi a walk round wid 'draws' inna mi pocket. Mi was a conductor before mi was a driver. So sometimes when mi on the bus, mi used to say how di place hot and take it out to wipe mi face, and more time yuh hear people bawl out and say 'Ducta, a wa dat yuh a use?'. Mi would just tell dem say a mistake and a mi wife panty, and right deh so di whole bus just start laugh. People use to love take mi bus because dem know mi a di real laughter man," he said.

With the front of the panty placed directly over his nostrils and mouth, McLarty insisted that the panties are enough to protect him from the deadly virus.

"Mi choose dem one ere because dem have di string whe easy fi go round mi ears and these type get the people dem attention so dem have to laugh. When mi have on mi masks mi nuh get a ticket and police stop mi all the time. Even a while ago a police stop mi and ask mi a wah dat pon mi face," he said

He told THE STAR that he also enters businesses places wearing the undergarments.

"More time mi wife send money fi mi collect a Western Union and a so mi go in mi panty. Di security allow mi come in because the Government said I should wear a mask and I am wearing one. Mine just different from the rest," he said.

Despite his choice of mask, McLarty mashed down rumours that he partakes in oral sex.

"Yuh see oral sex still, it is not for man to do. I go to good school, enuh, and scientists teach us that sperms strengthen women teeth and give vitamins, good skin and dem tings deh, so it's not for me. I don't give oral sex because when women do it, is more beneficial to them," he said with a straight face. He also dared other taxi men to copy his style.

"Mi was the fuss driver to say no fat people allowed in my car and mi even have a sign and den after dat mi see people start do it too. Mi nah discriminate anyone, first of all let me set it clear. But sometimes dem take up two seat so mi have to carry less passengers, so unless dem a pay fi two seat, mi nah carry dem," he added.

McLarty says he has a major interest in becoming a stand-up comedian but says he does not see a market in Jamaica for it.