A long and lasting love - Couple celebrates 70 years of marriage 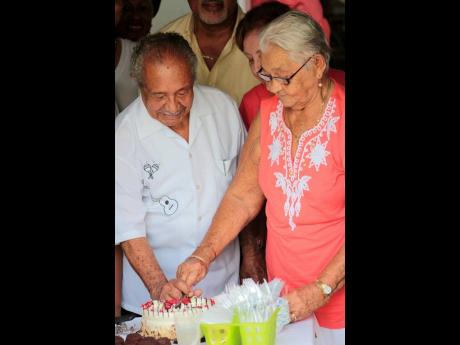 Alburn and Lola celebrating another occasion. 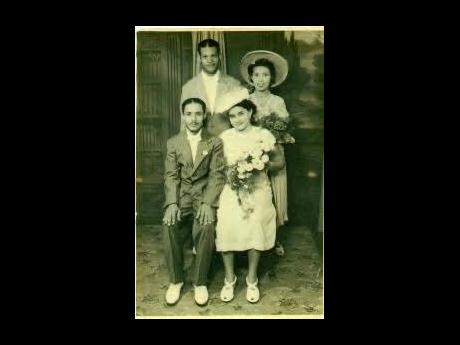 Alburn (seated, left) and Lola (seated, right) on their weddng day with Vernice Miller and Herbert Morris, Alburn’s sister and her husband. 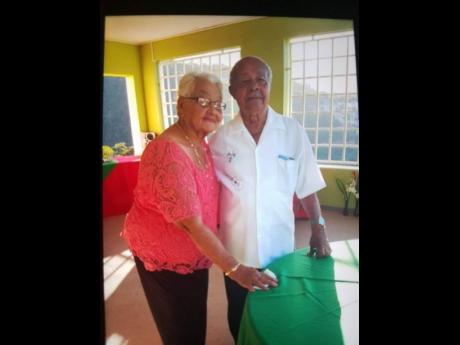 Though the coronavirus prevented them from visiting their native Portland for their 70th wedding anniversary yesterday, nothing would dampen the celebration for Alburn and Lola Miller.

Members of their family brought the celebration to the couple's Discovery Bay, St Ann, living room.

"They love music and love to dance. The both love to read and take long rides in the country, but because of the pandemic, we are keeping them off the road. But just the fact that they are around each other is a joy for them. There are times that they will just sit and speak about things that happened in the past and laugh about it," said Deon Barrett, daughter of the 'platinum couple'.

Barrett, the second child for the Millers, said her parents are still very sharp, despite a little trouble with their hearing.

"My father is 98 and he is still very active around the yard. He will pick his breadfruit and do little stuff around the yard. My mother is 96 and has arthritis, so she is not that mobile, but her mouth is very strong. She is very opinionated. She don't hold back anything, but they are like two teenagers in love," she said. "Don't ever say anything about one make the other hear, or you going to be in trouble. They will gang up on you and give you a tongue-lashing."

Alburn and Lola are originally from Swift River and Fruitful Vale, respectively, in Portland. Alburn, who worked with the Forestry Department, met Lola through his sister; they both worked at a postal agency in the parish.

"They started out as really good friends in the late 1940s. Then they courted for about two years, and then he wrote a letter to my grandmother expressing his interest in my mother and that he wanted to meet her. He said the first time he saw my mom, she was the most beautiful woman he ever saw," said Barrett.

After getting permission for Lola's hand in marriage, the couple, along with Alburn's sister and her husband, journeyed to Kingston to tie the knot on June 25, 1950, at the Holy Trinity Cathedral on North Street.

"After they got married, they weren't sure how they were going to get back home to Fruitful Vale in Portland. They eventually got a bus that dropped them off at Hope Bay, and then they saw a truck man who offered to assist them. My father and his sister's husband went in the back and his sister and my mother travelled in the front. It was no expensive vehicle like the norm," Barrett said.

Barrett said their family lived in many rural areas across Jamaica. She said her parents were firm disciplinarians who taught them 'never to look down on anyone'.

"We grew up in some of the poorest parts. We weren't rich but we were able to manage. One thing I can remember is that if my parents ever sensed that we were prejudiced towards anyone, we would get a piece of beating. We played with kids in the community and they taught us not to believe that we were better than anyone else. During the summer, our house was full of children and our helper would cook for everyone," she said.

Barrett marvelled that her parents have remained so close after so many years.

"For instance, if my dad isn't feeling well and we are taking him to the doctor, my mother would have to go along too, and vice versa. One principle that they live by is that they never go to their bed angry; they would settle their issue first. This is what we call everlasting love," she said.