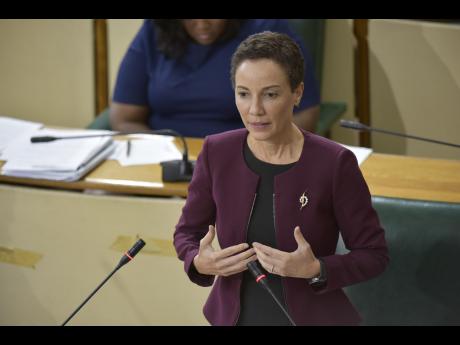 Leader of Government Business in the Senate, and Minster of Foreign Affairs and Foreign Trade, Senator Kamina Johnson Smith, addressing the sitting of the Upper House on Friday, June 26.

The Senate, on Friday, approved the extension of the States of Public Emergency (SOEs) in the Kingston Western and Kingston Central police divisions until July 25.

The SOEs, which were declared by Prime Minister, the Most Hon. Andrew Holness, on June 14, were slated to end on June 29.

They were instituted for an initial 14 days, in response to increased criminal activities in both divisions.

Leader of Government Business in the Upper House, Senator Kamina Johnson Smith, who piloted the Emergency Powers (No.2) (Continuance) Resolution, 2020, seeking the SOEs’ extension, noted that the Administration views the move as an important part of efforts to save lives and protect the residents of communities who are most at risk.

“This space will provide an effective security corridor to enable the security forces to strategically maintain control of these areas through a more coordinated and targeted suite of operational responses,” Senator Johnson Smith said.

She refrenced that the high level of violent crimes in the divisions is of a magnitude and nature that not only threatens, but greatly endangers public safety.

This, she pointed out, is largely seen in ruthless acts perpetrated by gangs and other criminal elements who display no regard for life or livelihood.

Senator Johnson Smith further argued that the imposition of SOEs has been effective in controlling the geographical spaces in which murders are occurring at the most chronic levels, adding that this has impacted the national statistics for serious crimes.

“An examination of the broader national picture, almost six months into 2020, reveals an overall 14 per cent reduction in major crimes as of June 22, 2020. All areas under an SOE recorded reductions in murders and shootings,” she said.

The Resolution was approved in the Lower House on Tuesday, June 23.