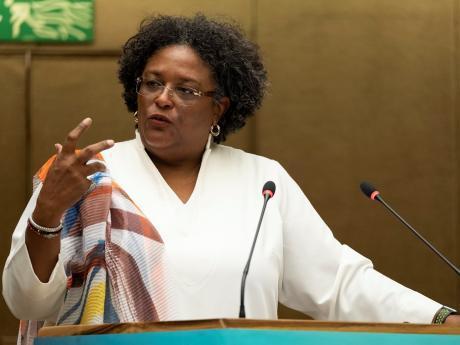 (CMC): The Government of Barbados has announced that it will be lifting the curfew in place since March to stem the spread of COVID-19, as the island reopens its borders to accommodate regional and international flights.

Speaking at a news conference on Friday, Prime Minister Mia Mottley said the lifting of the curfew would take effect from July 1 and that the airport will resume normal operations on July 12 with the arrival of an Air Canada flight.

Air Canada will be followed by British Airways on July 18; JetBlue on July 25 and Virgin Atlantic on August 1.  The Trinidad-based Caribbean Airlines (CAL) is to arrive sometime in mid-July, the prime minister said, while a meeting should have been held today to “determine the future” of cash-strapped LIAT, which had indicated that its services would remain suspended until July 15.

Mottley said that tourism is Barbados’ “core business” and as a result, the island could not keep its borders closed indefinitely, noting that during meetings with the Social Partnership last week there had been no objections to reopening the island’s borders.

“The reality is that we cannot afford to keep our borders closed indefinitely. However, I dare say that in examining our handling of the pandemic to date, we have been able to keep our number of cases and deaths at a manageable level, while at the same time keeping you informed and taking care of the vulnerable, as well as providing safety nets for those of you out of work at the moment,” she said.

“To my mind, these are all pointers that indicate that we can create and implement a plan to successfully open Barbados for commercial travel.”

Tourism and International Transport Minister, Kerrie Symmonds , said several protocols would be put in place before visitors could enter Barbados, declaring that the safety of airport workers and of the population was of paramount importance.

He said travellers from outside the Caribbean would have to take a COVID-19 PCR Antigen test 72 hours before they were scheduled to come to Barbados. That test will have to be accredited by a laboratory approved by the Ministry of Health.

Passengers from within the Caribbean Community (CARICOM) will have to take a test one week prior to departure. He said failure to have a test done before arriving here would mean they would have to undergo testing when they land. The testing will be done at the Concorde Experience museum, which is to be outfitted as a testing facility.

Symmonds said in an effort to facilitate larger numbers of visitors, hotels on the island had been earmarked for satellite testing facilities.But visitors will have to pay to stay at those hotels.

Meanwhile, Prime Minister Mottley said that in addition to lifting the curfew physical distancing will now be three feet.

The authorities said that all day care centres will reopen to full capacity from next week and that sporting events will be able to have spectators, once physical distancing and wearing of masks are observed. Indoor events will be subject to density requirements.

The limit for outdoor entertainment and social events has been raised to 500 people, and those indoor will be subject to density capacity and that from July 15, once the COVID-19 Monitoring Unit approves, that limit can go above 500.

The one-hour limit for church services will also be lifted, and baptisms will be permitted once people wear gloves, but the other protocols remain.