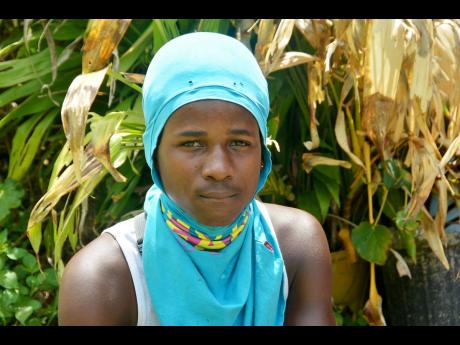 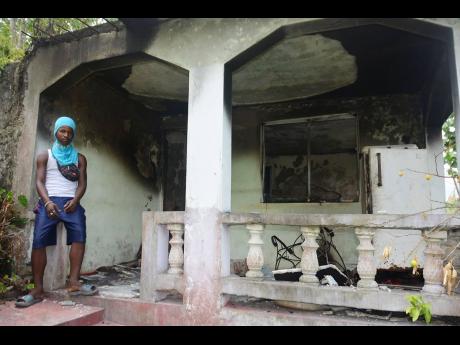 Aldain Daley at the house of Vernon Sewell, a senior citizen he rescued when the dwelling caught fire on May 19.
1
2

Eighteen-year-old Aldain Daley of Kilmarnock in St Elizabeth is being hailed as a hero after running inside a burning building to rescue an elderly man with a physical disability. Daley was hanging out with friends at a section of the community on May 17, when they spotted smoke coming from the house of Vernon Sewell, an 86-year-old retired farmer.

"I turned to my friends and say, we can't be here so and make the man burn up. After that I ran off, ran down the hill and ran up here so, and when I look the fire was blazing inside," the teen said, in an interview with JIS. The youngster said that he began calling out to the elderly Sewell, who was nowhere to be seen as the fire continued to spread. However, moments later, the young man spotted the elderly man barely making his way on to the veranda through a plume of smoke.

"I ran up the stairs and reached the veranda. A blockage was there and I had to kick it away. I call to him and it was like him can't come. So, I go there and a try lead him and he still can't move. So, I ended up having to lift him up in my hands and carry him go out on the step," Daley recounted.

Two of his friends later arrived on the scene to render some assistance. Working together, they took Sewell down from the hill and away from the fire that by then had completely engulfed the building. The elderly man, who sustained burns, was transported to the Black River Hospital where he currently remains in stable condition.

"If we were like three or four more minutes late, he would burn up, but luckily he got saved and I'm glad that nothing severe do him," Daley said.

"Though, to tell you the truth, I don't know where that braveness came from that day. It just appeared and I did what was right. Also, growing up knowing Maas Vernon, him did kind to me and stuff, so I couldn't be at a close range where I could a help him and make him get burn up, no matter the circumstances," he adds.

Omar Simms, district officer at the Santa Cruz Fire Station, said that Jamaica should be proud of Daley and his friends. "It is very rare seeing this. Not many would really take on the task to rescue an elderly like this. Him doing this, I would encourage young people on a whole to admire him," Simms said.

Daley, a past student of the Black River High School, spends most of his days in the community farming as well as performing other odd jobs. His dream, however, is to one day become a soldier, and he yearns for the opportunity.

"Yes, it is what I believe I can do, because I tell myself I want to be a solder from a tender age growing up. I also want to see Jamaica be a better place, the community and everybody to live as one and unite," he said.