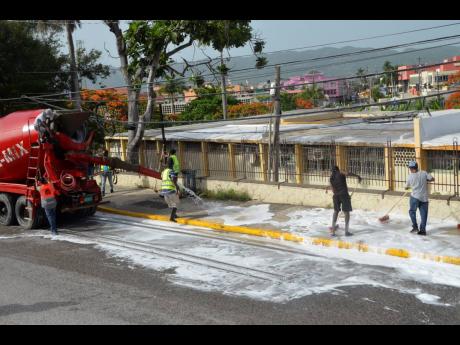 Sanitiser is being ejected from a truck on to a sidewalk along St James Street, while workers from the St James Municipal Corporation scrub the area, during a sanitisation exercise in Montego Bay on Sunday.

St James Street and Sam Sharpe Square in Montego Bay have been sanitised by the parish's municipal authority as part of ongoing measures to combat the coronavirus (COVID-19).

The exercise was carried out on Sunday in partnership with Caribbean Cement Company Limited and Premix Jamaica Limited.

Mayor of Montego Bay, Homer Davis, said the activity started from the City Centre building, and the focus was on areas mostly traversed by pedestrians and vehicular traffic.

He noted that the stakeholders "are well pleased with how things progressed".

Davis, who was addressing a press briefing that took place after the sanitisation exercise, encouraged residents of Montego Bay to keep the city clean.

"We can do much better. Some three years ago, we installed some 350 receptacles along the streets of Montego Bay and I would like to ask our citizens to please start using them again," he said.

For his part, Yago Castro Izaguirre, general manager of Caribbean Cement Company, said "Once we were [made aware] of that need, we were very pleased to come".

He said that the company is looking to do much more in Montego Bay, and contributing to the sanitisation of the city is a good place to start.

Caribbean Cement Company Limited and Premix Jamaica Limited provided two mixing trucks, with a combined 30,000 gallons of sanitiser, which was used to sanitise sidewalks, road surfaces, cobblestone and other areas.

The areas were prewashed by workers from the St James Municipal Corporation before being sanitised.