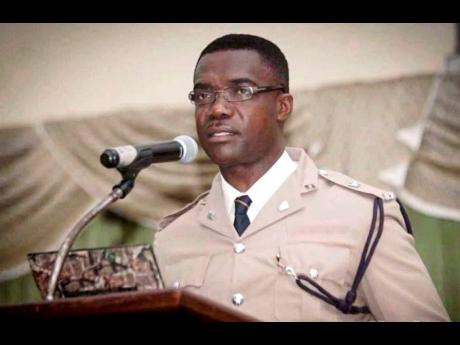 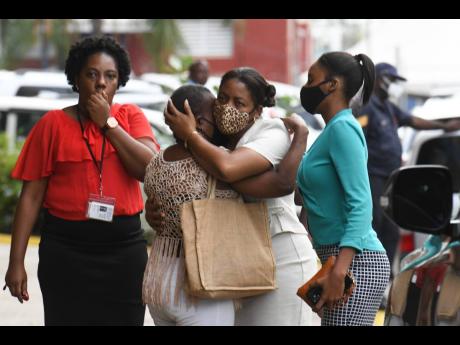 Mourners grieve on the compound of the Kingston Public Hospital shortly after getting news of the death of Superintendent Leon Clunis yesterday.
1
2

Minutes before Superintendent Leon Clunis passed away at the Kingston Public Hospital (KPH) yesterday, he was in high spirits as he was ready to be discharged.

In fact, his wife was ready to collect him and was waiting on his medication while his children prepared for his welcome home party. But this was not to be.

The teary-eyed Lindsay said Clunis' death was shocking and rocked even the medical staff of KPH, who developed a relationship with Clunis, who had been a patient there for more than two weeks.

"We were addressed earlier by the CMO (chief medical officer) of the hospital Dr Whylie and she gave a medical perspective. I have never been at a hospital where you had the medical team in tears, because nobody was expecting this. I spoke with a nurse who told me that she did 10 nights just to attend to him. He was this person that you wanted to be around. This really comes as a shock for everybody," Lindsay said.

Clunis, 52, former head of the Anti-Lottery Scam task force, was one of four cops who were shot during a pre-dawn police operation in Horizon Park, Spanish Town, St Catherine, on June 12.

Just over 11 hours later, the main suspect - Damion Hamilton - was cut down by police at a house in Cooreville Gardens, St Andrew.

Lindsay was just one of dozens of Clunis' colleagues who visited KPH yesterday. Some wept openly while others fought hard to hold the tears. His wife was a picture of grief as she exited the hospital before being whisked away in a waiting vehicle.

Senior Superintendent Wayne Cameron, head of the St Andrew South Police Division, was also distraught and shocked by the sudden passing of Clunis. He stated that he had spoken to him approximately three hours before he died.

"He called to remind me that he was going home. I spoke to his wife earlier just so we could put the necessary things in place for him to go home. I cannot recall at any time in our history that we have lost three officers in one incident. I want to say to Jamaica that we stand resolute and I want his family to know that they have our full support," he said.

Superintendent of Police Steve Brown, who had known Clunis for almost 30 years, said Clunis always led from the front.

"Knowing that, we saw him as warrior, and initially when he got shot, we feared the worst for the first couple of days. But we just never expected this. We had a long conversation this morning (yesterday) and I was supposed to take some things to him, but I turned back because of the rain and told him that I would take them to him at his home. He was looking forward to going home and we never had the slightest idea of this happening. He said he would have called me when he got home but maybe he was thinking of another home. This is really sad," he said.

While still in hospital, Clunis spoke with Radio Jamaica's Emily Shields on The Hotline programme.

"I'm holding on. God has a purpose for me. They're taking good care of me in here," he said, also asking Jamaicans to pray for the families of Hylton and Biggs.

"At the JCF, we are not used to having trauma of this proportion. This is a new low, but we are strong and, as police officers, what we have come to reconcile with is that death is the risk or consequence of us serving our country," he said. "What we want is the Government to recognise the tremendous sacrifice that we make. We don't want the response to be lukewarm or by next week it appears as if it's business as usual. We have received some commitments from the prime minister and I know that Mr Clunis' passing will provoke another round of tributes, and we hope that the people of Jamaica will rally around the police and give us their support."