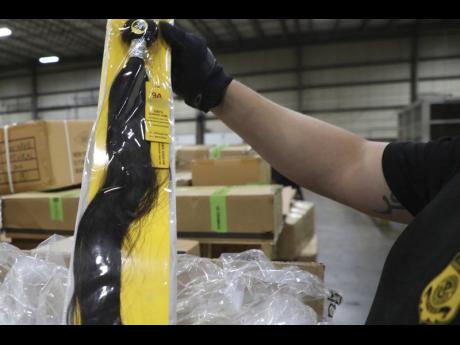 Federal authorities in New York on Wednesday seized a shipment of weaves and other beauty accessories suspected to be made out of human hair taken from people locked inside a Chinese internment camp.

U.S. Customs and Border Protection officials told The Associated Press that 13 tons (11.8 metric tonnes) of hair products worth an estimated $800,000 were in the shipment.

“The production of these goods constitutes a very serious human rights violation, and the detention order is intended to send a clear and direct message to all entities seeking to do business with the United States that illicit and inhumane practices will not be tolerated in U.S. supply chains,” said Brenda Smith, executive assistant commissioner of CBP’s Office of Trade.

Rushan Abbas, a Uighur American activist whose sister, a medical doctor, went missing in China almost two years ago and is believed to be locked in a detention camp, said women who use hair weaves should think about who might be making them.

“This is so heartbreaking for us,” she said. “I want people to think about the slavery people are experiencing today. My sister is sitting somewhere being forced to make what, hair pieces?”

This is the second time this year that CBP has slapped one of its rare detention orders on shipments of hair weaves from China, based on suspicions that people making them face human rights abuses. The orders are used to hold shipping containers at the U.S. ports of entry until the agency can investigate claims of wrongdoing.