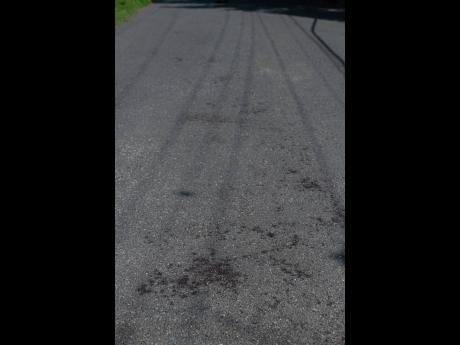 Bloodstains and footprints were visible along Lawrence Drive in St Andrew yesterday after a man was stabbed the previous night.

A suspect has surrendered to the police in connection with the stabbing death of a man on Lawrence Drive in St Andrew on Wednesday night.

Dead is 40-year-old Damion Carter. According to a report from the Constant Spring police, about 10:40 p.m., Carter, who was at the home of his girlfriend, was stabbed multiple times by a man.

When THE WEEKEND STAR visited the upscale community yesterday, there was a trail of blood and footsteps that ended at the entrance of the roadway.

"There was a lot of noise, including screams coming from over the house, and I peeped through my window and saw a man jump the fence and he was covered in blood. He was clearly wounded. He stopped beside a pickup truck. I don't know if he was trying to get in or what but after that he walked off and he was wobbling," a resident said. "Shortly, a woman was seen running behind him but he had walked and collapsed at the end of the street. I have lived here for a little while. This is something that is unheard off."

Shortly after the incident, a woman who identified herself as the sister of the victim's girlfriend, shared a thread of tweets, one of which stated that the suspect has been harassing her sibling for years and would often show up at her workplace and yard. She also stated that the suspect was employed to the Jamaica Public Service (JPS).

However, yesterday, JPS issued a notice stating that the suspect was not employed to the utility company and was posing as an employee.

"Upon investigation, we have been made aware that he is employed to OBR Electrical, one of our sub contractors. We will continue to look into the matter and report to the necessary authorities," a part of the notice read.