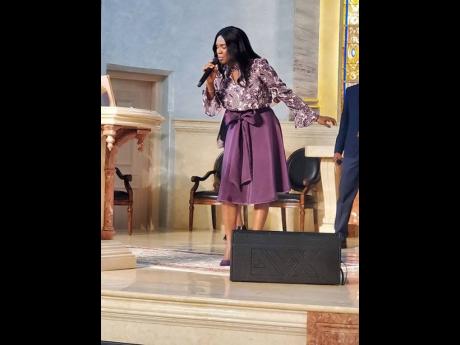 MATCHING AND MINISTERING. Gospel ambassador and entrepreneur Judith Gayle is caught up in the moment, complete with a signature two-piece outfit that will be a feature of her new clothing line with emphasis on skirts, coming soon to a boutique near you. 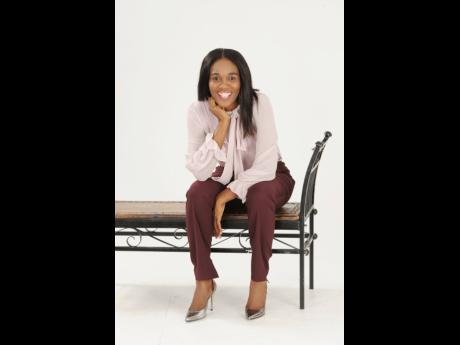 Left: SMILE AWHILE. Judith takes a break to give face and body some rest and relaxation before going back to a recent studio session. 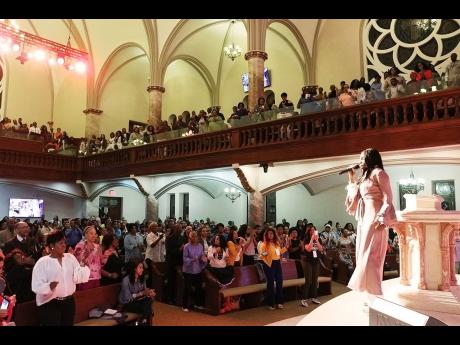 MAKING A JOYFUL NOISE. Minister/Evangelist Judith Gayle has the attention of a sold-out audience at a recent concert.
1
2
3

Judith A. Gayle is a prime example of God's ability to transform brokenness to wholesomeness and a life of despair to a life of divine purpose.

Born in Clarendon, Jamaica, Gayle did not have the privilege of completing high school, but that did not deter her from successfully pursuing higher education in later years. She attended the Jamaica Open Bible Institute from 2009-2010 and completed her studies when she moved to New York, graduating from Canon University with a Bachelor of Arts degree in Theology in 2014.

Since childhood, Gayle has had a myriad of experiences that helped to shape her radical identity and uncompromising love for God. She found solace in music and began a journey in the 1980s, singing background for secular artistes, including Richie Stephens. She rose to prominence as a cabaret singer in Jamaica's most prestigious hotels.

In 1999, she was invited by a friend to a local church in Clarendon and it was there that her life changed as God captivated her heart.

In 2007, Gayle, as an international gospel singer/songwriter, was nominated for the Mahalia Jackson Award in Canada; in 2008, she placed second in the Jamaica National Song Festival with the song Mi Nah Lef Jamaica, and in 2009, she was named Female Artiste of the Year, also in Jamaica.

In 2009, Gayle captured the MegaJamz Gospel Awards' Artiste of the Year in Jamaica; in 2011, she copped the Atlanta Gospel Music Award for Best Collaboration; in 2015, she was awarded the Trail Blazer Award from Gospel Vibes Radio in Connecticut. A highlight of the year 2015 was her appearance at the famed Apollo Theater in Harlem, New York, singing alongside some of America's greats, including Vickie Winans. In 2016, she was nominated for the Sterling Gospel Music Awards in Jamaica.

Gayle has been churning out great gospel music over the years, inspiring millions with hits such as The Sun Shines Again, Bigger God, Survivor, Things Already Betta, Thank You Lord, I Say Jesus, and Stay with God.

The mega hit, Give Me Jesus, has become quite an anthem at concerts, on radio stations and on YouTube, where it has amassed more than 10 million views (YouTube), a social media achievement that is second to none among Caribbean gospel artistes.

Evangelist Judith Gayle was ordained a minister in 2014 by Bishop Michael A. Frith of the Family of Christ Church of God Ministries International in the Bronx, New York. She now serves as the Worship Leader at The Temple of Restoration in Brooklyn, New York, under the leadership of Bishop Angelo Barboso.

In addition to her song ministry, Gayle is also an accomplished author and humanitarian.

She has published four inspiring and challenging books: Broken To Be Blessed: Destined To Win, This Is Real, Take The Mask Off and Had I Not Known You. She also has a children's book in production.

Gayle delights in helping people and does so readily, and without seeking credit. Just recently, she led a campaign to secure much-needed donations in cash and kind for hurricane victims in the Caribbean region. That mission found favour with the international community and friends at the United Nations, earning her an ambassadorship from the Word of Life Christian Fellowship Ministries, in December 2017.

In a matter of weeks, and as the virus slows in parts of the country and economies reopen in a reimagined space, she will be taking her latest passion, a new clothing line (Skirts), for the mature and inspired, to market and at a boutique near you!

"Those who know me, know that I do not settle for mediocrity and pretentiousness. I believe if you allow God to mould you, you will be the vessel He calls you to be, and I think I'm a living proof of that transformation," she said.