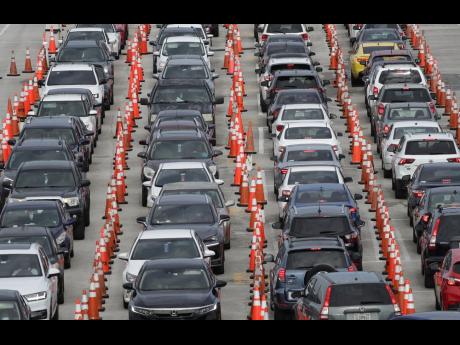 Lines of cars wait at a drive-through coronavirus testing site, Sunday, July 5, 2020, outside Hard Rock Stadium in Miami Gardens, Fla. Florida health officials say the state has reached a grim milestone: more than 200,000 people have tested positive for the novel coronavirus since the start of the outbreak. (AP Photo/Wilfredo Lee)

LOS ANGELES (AP) — For two weeks, Rachael Jones has stayed home, going without a paycheck while waiting and waiting for the results of a COVID-19 test from a pharmacy near Philadelphia.

“I’m just so disappointed. I just don’t know how -- with the resources and the people we have and the money we have -- we can’t get this right,” she said.

Four months, 3 million confirmed infections and over 130,000 deaths into the U.S. coronavirus outbreak, Americans confronted with an alarming resurgence of the scourge are facing long lines at testing sites and going a week or more without receiving a diagnosis.

Some sites are running out of kits even as testing is ramped up.

Labs are reporting shortages of materials and don’t have enough workers to process the tests, leading to severe backups that could worsen as economies reopen and new infections emerge.

Scenes of testing sites turning away people and motorists waiting in the summer heat in long lines separated into numerous lanes by traffic cones have left Americans frustrated and wondering why the U.S. can’t seem to get its act together, especially after it was given fair warning over the past several months as the virus spread from China to hot spots such as Italy, Spain and New York.

“It’s a hot mess,” said 47-year-old Jennifer Hudson of Tucson, Arizona. “The fact that we’re relying on companies and we don’t have a national response to this, it’s ridiculous. … It’s keeping people who need tests from getting tests.”

It took Hudson five days to make an appointment through a CVS pharmacy near her home.

She managed to book a drive-up test on July 5, more than a week after her symptoms fatigue, shortness of breath, headache and sore throat first emerged.

The clinic informed her that her results would also probably be delayed.

The number of tests per day in the U.S. is up to about 640,000 on average, an increase from around 518,000 two weeks ago, according to an Associated Press analysis.

Newly confirmed infections per day in the U.S. are running at over 50,000, breaking records at practically every turn.

In an especially alarming indicator, the percentage of tests coming back positive for the virus is on the rise across nearly the entire country, hitting almost 27% in Arizona, 19% in Florida and 17% in South Carolina.

As more people are tested, an increase in the raw number of positive tests is to be expected.

But if the virus is being brought under control, then the percentage of positive results relative to the total number of tests should be coming down.