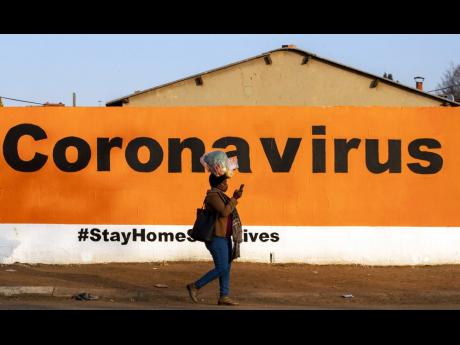 In this June 19, 2020, file photo, a woman wearing a face mask passes a coronavirus billboard carrying a message in a bid to prevent the spread of the virus. South Africa’s reported coronavirus are surging. Its hospitals are now bracing for an onslaught of patients, setting up temporary wards and hoping advances in treatment will help the country’s health facilities from becoming overwhelmed. (AP Photo/Themba Hadebe, File)

Bandile Masuku, a medical doctor and member of the province’s executive council, said it was the public’s responsibility to make sure the gravesites were not needed.

“It’s an uncomfortable discussion,” he said.

The number of confirmed virus cases in Gauteng is now over 71,000, or 33% of South Africa’s cases.

The country has more than 215,000 confirmed cases and is posting some of the world’s highest daily totals of newly reported cases.

Africa now has more than a half-million confirmed coronavirus cases.

The continent-wide total is now over 508,000 after South Africa recorded another day of more than 10,000 confirmed cases as a new global hot spot.