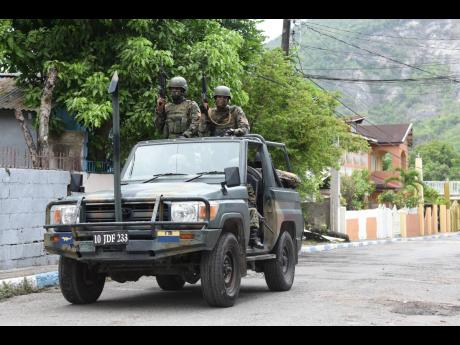 Soldiers on patrol in August Town yesterday after a Zone of Special Operations (ZOSO) was declared in the community. 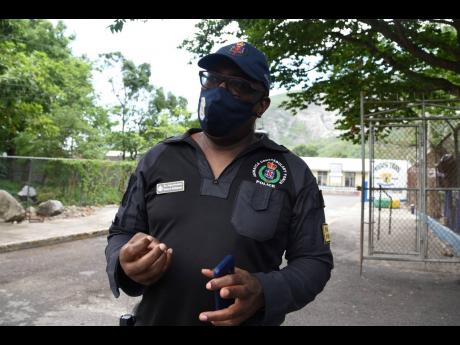 Senior Superintendent of Police Steve McGregor says that he and the security forces will be dismantling gang bases in the troubled August Town community through the 'clear phase' of the zone of special operations (ZOSO) declared in the area yesterday.

He stated that there has been a police operation in the embattled St Andrew space since Tuesday night. Ten males were detained.

"The clear phase also means that we will be focusing on the retrieval of illegal guns and ammunitions. One of the things that was missing in all of the interventions of August Town was that a proper clear phase was not gone into. The intervention was probably too fast, so it didn't last, and the longest that crime was down was the one-year phase. We are hoping that this time, we will get to do it," he said.

During a press conference yesterday, Prime Minister Andrew Holness stated that the ZOSO was implemented to restore public order and sustainable peace.

As THE STAR toured the community yesterday, more than a dozen checkpoints were observed where members of the security forces searched vehicles and individuals.

Councillor for the division, Venesha Phillips, said she is heartened that her pleas for a ZOSO have been answered.

"I have, however, reasoned with the security forces that there are some critical points that I know the gunmen can use to leave the community, and I have observed that those are not strategically covered. There are two along August Town Road that will take you into points that can let the men leave the space. There are about three in Gold Smith Villa. I believe that some of the placing could have been different to get a different effect. I am happy that there is a start, though, because this means that the gunshots will cease," she said. So far in 2020, close to 20 persons have been murdered in August Town.

"However, we have done our best to curtail the area as best as we can. The thing is, if the bad men come out, we won't allow them to come back in and maintain any base that they have. We will be using our intelligence to dismantle those bases and take charge of them as best as we can," he said.

The few residents who spoke to the media said they are appreciative of the ZOSO. One man said that yesterday was the first time in a while that he had ventured outdoors to 'chill' with his friends.

"Usually, if we see a car a come and we don't recognise is who, yuh see man and pickney all a jump wall. Yuh know how long some a we nuh turn on we television or radio because we have to hear what a gwan at all times? If yuh did live in August Town, yuh would be happy for the ZOSO," he said.

He stated that the community could only be crime free if the criminals are locked away for good.

"Yuh remember the year when no man never dead? This was because police come and take way a lot of criminals. So the road did nice. But as soon as dem man deh come a road, a vengeance alone a go deh pon dem mind, so yuh a go see the war rise up," he said.

One woman said that residents were hoping that a ZOSO would have been implemented sooner.

"When dem man ya a shoot and a drop bomb, it nuh nice. Sometimes all mi house tremble when di shot dem a beat. The man dem a shoot people like bird. The youth dem waan something constructive to do, and mi hope that this intervention will help," she said.