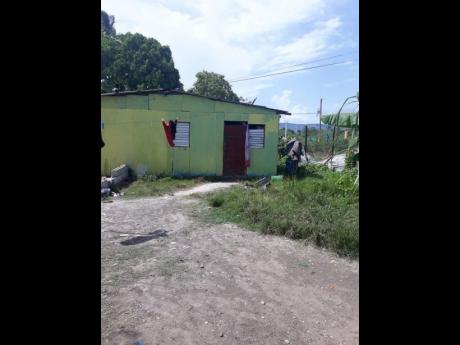 The house where the three men were murdered early Thursday morning.

The Spanish Town police are probing the circumstances behind the killing of three men on St Johns Road, Spanish Town, early yesterday morning.

According to police reports, the men were in a house sleeping with other occupants when three men armed with handguns and rifles knocked on the door and shouted, "Police! Open up."

The occupants opened the door, and the men entered and placed Vassell, Williams, and the other man face down and shot them execution-style, killing them on the spot.

When THE WEEKEND STAR visited the area yesterday, there was hardly anyone in the lane.

One of the other persons in the house at the time of the shooting said that the murders occurred close to 1 a.m. and that it was clear that the killers came only for the three men.

One of Williams' relatives said that while he didn't have a 'squeaky-clean' reputation, he didn't deserve to be murdered.

"Him a never really a saint. The problem that him used to have years ago was that him always a tief goat and dem summen deh, but him cut out all a dat fi a while now. Him have a clean slate now. Dem chop him up nuff time fi fight and di goat ting, but him name never call on any shooting and dem ting deh. Him all drop off a light post couple time and all bun up," the person said.

The relative added that Williams, who was employed to the Jamaica Public Service Company, was very hard-working and did fishing at Greenwich Farm in his spare time.

She stated that he had been living on St Johns Road for a while but had returned to his home in Kitson Town just weeks ago.

"Him babymother go back home earlier this week, so him bredda let him off in St Johns Road last night (Wednesday) because him say him a go look for di baby. Dis morning (yesterday), we just get di news say dem shoot up the house," she said.