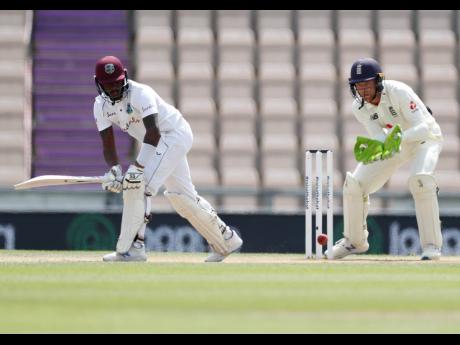 Windies batsman Jermaine Blackwood plays a shot during the fifth day of the first Test match against England at the Ageas Bowl in Southampton, England, on Sunday. 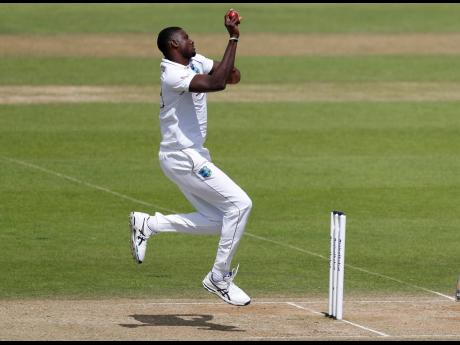 Windies’ captain Jason Holder in stride delivering a ball during the fourth day of the first cricket Test match against England at the Ageas Bowl in Southampton, England, on Saturday.
1
2

Captain Jason Holder said on Sunday that he had not spoken to Jermaine Blackwood following his first-innings indiscretion that cost him his wicket cheaply, but always knew the right-hander would have a key role to play in any successful run chase to win the opening Test against England.

Blackwood gifted his wicket cheaply for 12 on Friday, smashing an ordinary delivery from off-spinner Dom Bess into the mid-off's lap as the Windies were dismissed for 318 in reply to England's 204.

However, the 28-year-old redeemed himself with an innings of the highest quality here on Sunday, laying aside his usually impulsive stroke play to top-score with 95 as the Windies chased down a target of 200 to pull off a four-wicket win at the Ageas Bowl.

"After his first-innings dismissal, I said nothing to him," Holder told a media conference. "He knew what he'd done and he knew he is a better player than what he did in the first innings, so there was no need to talk to him.

"I [always] felt he was going to be a crucial player for us in this run chase, him and probably John Campbell, because these guys, when they get going, score relatively quickly and can really swing the tide for us when they form partnerships.

"I just said to Jermaine, 'Look, just give yourself a chance, give yourself a good chance. See a few balls and then play your game. If you see a ball in your arc and you feel you can put it away, put it away', because that's the way he plays.

"I don't like to get into complicating players' heads and congesting their brains with too much information. They're all responsible enough and know themselves well enough. We're just here to help one another - lots of these guys in the dressing room help me, and help me in significant ways."

The game marked Blackwood's first start in a Test match in nearly three years after featuring on the Windies' last tour here in 2017, before being axed later that year.

He appeared as a concussion substitute in the second Test against India in Kingston last year when Darren Bravo was forced out of the game, but missed out again thereafter.

Blackwood impressed in the recent West Indies first-class championship, where he plundered nearly 800 runs at an average of 51, and Holder said he had merited his place in the side by the sheer weight of his performances.

"To be honest, his case was pretty strong to get back into the team. He scored a double hundred this year in a first-class game," Holder explained.

"Unfortunately for me, I haven't been able to see him bat but his numbers speak for themselves, and he's not a slouch with the bat at this level, either.

"In comparison to the players we've got, he's still averaging above 30, so he's done well for us. We just hope he can kick on and make a few more hundreds."