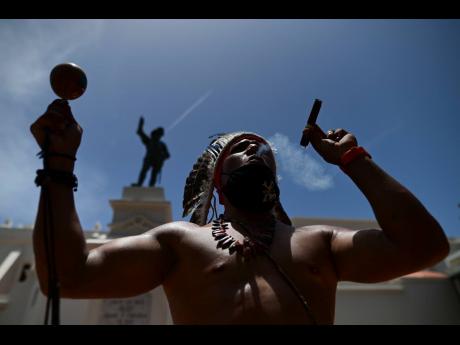 Gypsy Cordova blows smoke and shakes a maraca in front of a Juan Ponce de Leon monument while leading a group of activists in a march demanding statues and street names commemorating symbols of colonial oppression be removed, in San Juan, Puerto Rico on Saturday, July 11. Dozens of activists marched through the historic part of Puerto Rico’s capital on Saturday to demand that the U.S. territory’s government start by removing statues, including those of explorer Christopher Columbus. 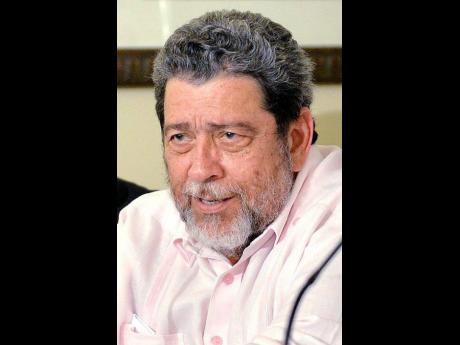 Police are investigating the shooting of a 43-year-old radio announcer after he was ambushed by gunmen at his home in Chaguanas in Central Trinidad yesterday. The police have said that Andy Williams has been hospitalised in a serious condition after he was shot at least four times.

He is reported to have been in the driveway of his home when he was confronted by two men, and as he attempted to run to safety, was shot in the back and arm.

The gunmen then fled the scene.

Relatives who heard the commotion came outside and found Williams bleeding from multiple wounds.

The police have given no motive for the attack.

PM "pained" by no carnival this year

Prime Minister Allen Chastanet says that he is disappointed that Carnival 2020 had to be abandoned this year because of the threat caused by the coronavirus (COVID-19) pandemic.

"It pains me to know that we cannot follow up with the success and high standard we enjoyed and established last year," Chastanet wrote on his Facebook page as the island would have observed the annual festival on Monday.

Chastanet said that he was convinced that this year's festival would have been the biggest and best ever experienced and that the demand for participation in bands, events, and local accommodation was already record breaking, dating back to January.

"I could just imagine the excitement and energy that the country would have been abuzz with over the next few days," Chastanet said, noting that over the past four years, his administration had increased investment in the festival.

ST VINCENT AND THE GRENADINES

The St Vincent and the Grenadines government has hinted at the possibility of suspending flights from the United States after the island recorded 12 cases of the coronavirus (COVID-19) after reopening its borders to international flights.

The National Emergency Management Organisation (NEMO) said on Sunday night that there were 21 active cases of the respiratory illness in the country, including two cases, the origins of which health officials were unsure about and were investigating.

The Government of The Cayman Islands will reopen its borders to international travel starting September 1.

Deputy Premier and Tourism Minister Moses Kirkconnell, who made the announcement on Friday, said that the reopening would come in phases.

Some of the measures that will be taken once the borders reopen include having passengers take a COVID-19 test 72 hours before entering the territory - that result must come back negative; approved passengers arriving at the Owen Roberts International Airport adhering to the facility's new social-distancing protocols; and visitors receiving a health-monitoring device upon arriving in The Cayman Islands.