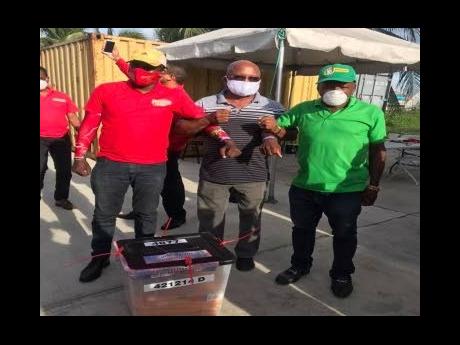 Agents of the two main political parties in Guyana’s elections. 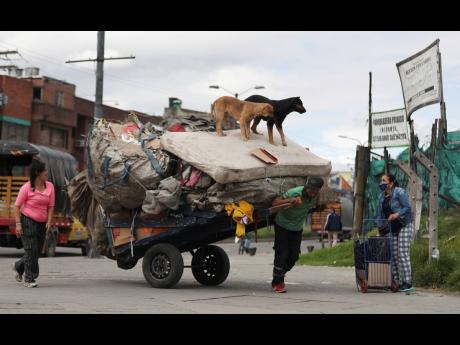 Dogs stand on a mattress hauled on a cart by a recycler in Bogota, Colombia, last Thursday, amid the new coronavirus pandemic.
1
2

The Bahamas government has implemented the first in a proposed series of weekend lockdown of the country from this weekend, warning nationals that "unless you are an identified essential worker, you may not leave your place of residence for any purpose other than to seek urgent medical care or to purchase food or medicine".

Prime Minister Dr Hubert Minnis said that health officials have made a series of recommendations to control and reduce the spread of COVID-19, including "but not limited to the closure of domestic borders, discontinuing indoor and outdoor dining, restricting social gatherings, weekend lockdowns and a full national lockdown".

Bahamas has recorded 316 cases and 11 deaths from the virus that was first detected in China last December.

Minnis said after much consideration, his administration has determined a way forward that takes into account the grave health crisis and the need to provide economic survival.

British admiral's statue to be removed from Heroes Square

The Barbados government says it will remove the statue of Lord Nelson from the National Heroes Square in the heart of the capital, Bridgetown.

Minister with responsibility for culture, John King, said the decision was made in light of the fact that substantial consultations were carried out about two decades ago by the National Heroes Square and Development Committee as well as the Committee of National Reconciliation, which both recommended that the statue should be relocated.

The removal of the statue comes at a time when the global anti-racism movement, sparked by the death at the hands of police in the United States of George Floyd, has forced many people in Europe and other countries to confront uncomfortable truths about their pasts.

The bronze statue of Lord Nelson at the top of Broad Street in the capital city of Bridgetown was erected in March 1813 in the area known as Trafalgar Square, opposite Parliament Buildings. The statue predates Nelson Column in Trafalgar Square in London by nearly 30 years.

Nelson visited Barbados in 1805 and was considered a hero by locals of the day for his battles against the French, who controlled some of the other islands in the Caribbean.

The government of the Cayman Islands says residents and visitors who want to leave the Cayman Islands on the national carrier, Cayman Airways, or charter flights will now be able to make their travel arrangements directly with the carrier and no longer through Travel Time.

Travel Time, that is run by the Ministry of International Trade, Aviation and Maritime Affairs, was established by the government at the start of this month to manage outbound and inbound travel during the time borders are closed and scheduled commercial flights are not available.

Although Cayman's airport and seaports remain closed, the ministry said a growing number of people need to leave the islands for various reasons.

For persons who are contracting a charter service or travelling via private aircraft, flight authorisations must be granted by the Civil Aviation Authority. All outbound passengers will be subject to normal customs and border-control processes to leave the country.

Court to rule in election case on Thursday

The Court of Appeal Saturday said it would provide a ruling on Thursday to a lower-court ruling in the ongoing challenges of the disputed March 2 regional and general elections.

"Having regard to the submissions we have heard, the fact that more submissions will be coming in up to tomorrow, we are in a position to say we will give our decision on Thursday... the 30th of July at 11 a.m.," said Justice Dawn Gregory-Barnes on behalf of the three-member Court of Appeal.

Guyanese President David Granger and his incumbent Partnership for National Unity coalition has refused to accept that the country's opposition has won the election.