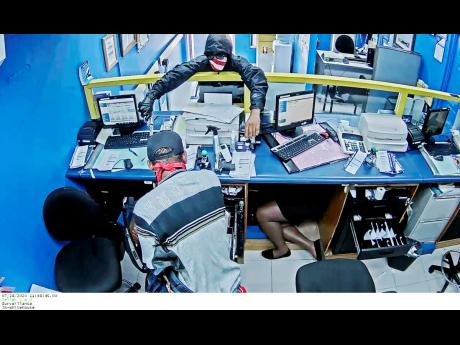 Camera footage shows the robbery in progress at the JN Bank branch in Whitehouse, Westmoreland, yesterday. 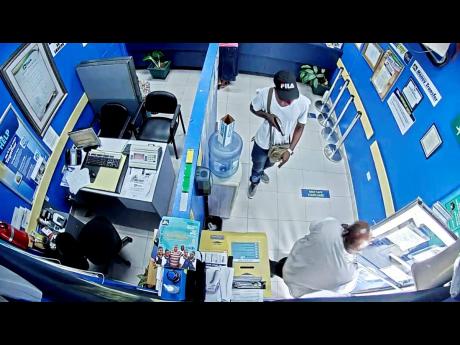 Camera footage shows the robbery in progress at the JN Bank branch in Whitehouse, Westmoreland yesterday.
1
2

A woman who was dragged from a taxi that was hijacked by escaping armed robbers yesterday morning is counting her blessings.

"Mi frighten so till. As mi a go in a the car, the three man dem appear from nowhere and stick up the driver," the trembling woman said. "One a di gunman dem grab mi and drag mi from out a the back a di taxi an tell mi fi run. Den mi see dem jump in a the car an drive off. Until now mi still a tremble like a leaf."

The men had just robbed the Jamaica National Bank branch in Whitehouse, Westmoreland, and were making their escape.

They held a taxi operator at gunpoint, forced him and the woman out of the vehicle, and drove away in the car.

Reports by the Whitehouse police are that shortly after 11:30 a.m., three men wearing masks walked into the branch posing as customers.

After spending several minutes inside the establishment, they brandished handguns and held employees, several customers, and the security guard at gunpoint.

They then took the guard's pistol and beat him. The robbers then took approximately $3.2 million in cash before escaping.