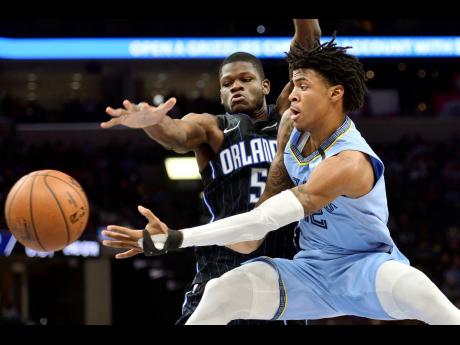 In this March 10, 2020 file photo, Memphis Grizzlies guard Ja Morant (right) passes the ball as Orlando Magic centre Mo Bamba (5) defends during the first half of an NBA basketball game in Memphis.

Forget hitting a rookie wall or stumbling into the play-offs exhausted and banged up.

The NBA's break because of the coronavirus pandemic gave rookies an off-season within a season. They've had the chance to heal up, study film and gain some much-needed pounds to better handle the gruelling season in a league filled with savvy veterans.

Some rookies will resume play a bit smarter and stronger, giving them a chance to finish off their debut seasons in style.

"I took the time off really to ... focus on my body, do the right things to continue to get better," said Grizzlies guard Ja Morant, the likely NBA rookie of the year. "Studied a lot of film. Kind of like I had an off-season but still preparing to come back and play."

Improving during a pandemic had its challenges.

Some rookies filled garages with weights. Those living in apartments or condos had to be very creative to even find a basket to get up shots.

"It was challenging for everyone. No one has ever been through this," said Pelicans coach Alvin Gentry, whose club has three first-round picks in the rotation this season, led by first overall draft choice Zion Williamson.

"The younger players, I think the thing with them is that they tried to stay in shape and tried to keep themselves in a conditioning situation that they felt like, when they came back, they wouldn't be behind. ... We'll have to see how it works out, but I think those guys did put in work during the hiatus."

Perfecting 3-point shots were also was a major focus.

Heat guard Tyler Herro spent a day putting together a portable hoop sent to him by teammate Jimmy Butler.