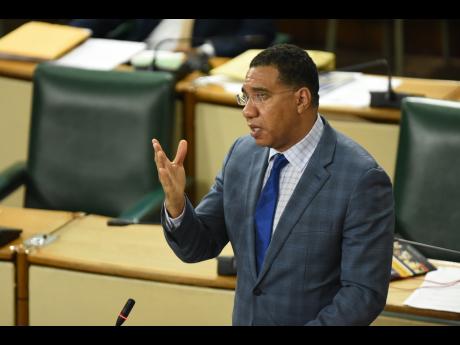 Prime Minister Andrew Holness, emphasiing a point as he delivers a statement in the House of Representatives on Tuesday, July 28.

Prime Minister Andrew Holness, says the backlog of COVID-19 tests will be cleared by the end of this month.

“There is a significant backlog and we are not satisfied with that. The Minister of Health and Wellness, Dr. Christopher Tufton has committed that he will ensure that these are cleared up by the 31st of July,” he said.

The Prime Minister was responding to a question raised by Opposition Spokesperson on Health, Dr. Morais Guy, following a statement he made in the House of Representatives on Tuesday.

He noted that, so far, tests have cleared up to July 5, citing a shortage of testing kits as a key reason for the delays being experienced.

“The Government has been very clear and transparent with our testing policy. The challenge now is that Jamaica is just one of the many countries that are experiencing this problem. There is a shortage of the testing kits. There is a global shortage and we were and still are running low on the supplies,” he said.

The Prime Minister informed that orders have been placed for additional testing kits and arrangements are in place to ensure that testing continues for business travellers to Jamaica.

In the meantime, Prime Minister Holness noted that with 855 COVID-19 cases to date, the country is still below the 1,092 cases that had been projected based on the acceleration of the Controlled Re-entry Programme, which started on May 9.

“Between July 1 and yesterday (July 27), the number of new positive cases places us below this threshold, even accounting for a backlog in testing cases,” Mr. Holness said.

He noted that there are 304 imported or import-related cases under the Controlled Re-entry Programme, and had the country’s borders remained closed, the number of COVID-19 cases would have been in the region of 549.

“Our curve would’ve been virtually flat, excluding those cases. Essentially, we have managed to flatten the curve. However, with controlled re-entry, you will note that there is an increase,” he added.

The Prime Minister pointed out further that since July 1, there have been 151 new cases, of which 137 are imported or import-related. Forty-five persons have been repatriated.

In addition, Mr. Holness informed that 724 persons have recovered to date and even though there is a slight recent uptick from imported cases, the number of active cases is at 97.

As of July 27,  25 persons are hospitalised, inclusive of suspected cases of COVID-19.

In the meantime, the Prime Minister noted that the Government’s management of the Tourism COVID-19 Resilient Corridor  has worked quite well and I must commend the tourism industry for its compliance with the protocols established.

The Corridor restricts visitor movement, only allowing authorised access to specific sections of the island.